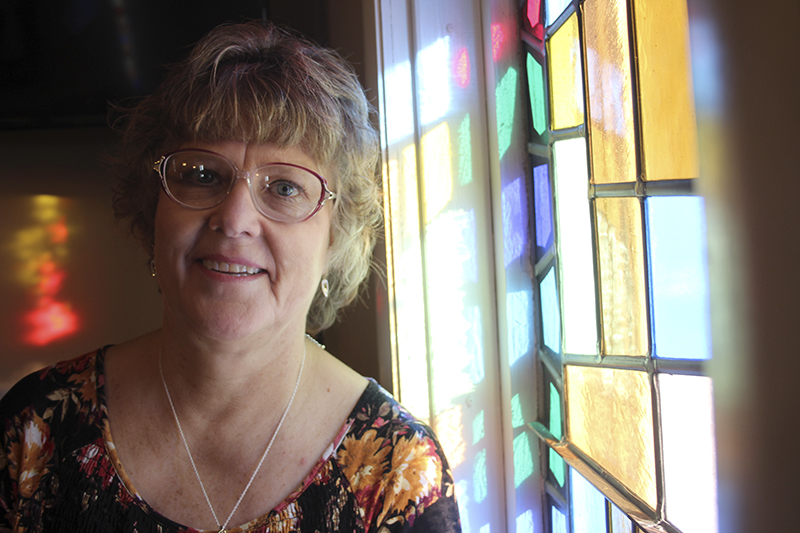 Diane Butler is the pastor at Victory Life Church in Geneva, where she leads a congregation of about 30. “God hasn’t called me to big,” Butler said. “He’s called me to love people. So if it’s one or 100, I guess it doesn’t matter.” Sarah Kocher/Albert Lea Tribune

Seven years later, the small, one-story building in Geneva has about 30 people in its congregation, led by the Rev. Diane Butler.

In 2012, it was between six and eight; that was the number of worshipping members left in the Methodist church that owned the building before Victory Life.

Diane Butler and her husband, Jim, used to take donations to St. Paul and Minneapolis. When the Methodist church knew it would sell, the Butlers were asked if they wanted to take any furniture to donate.

According to the Rev. Patrick Stitt of Vibrant Life Assemblies of God Church, Jim Butler called him up and asked if he wanted to look for furniture, too, for the Ellendale church. 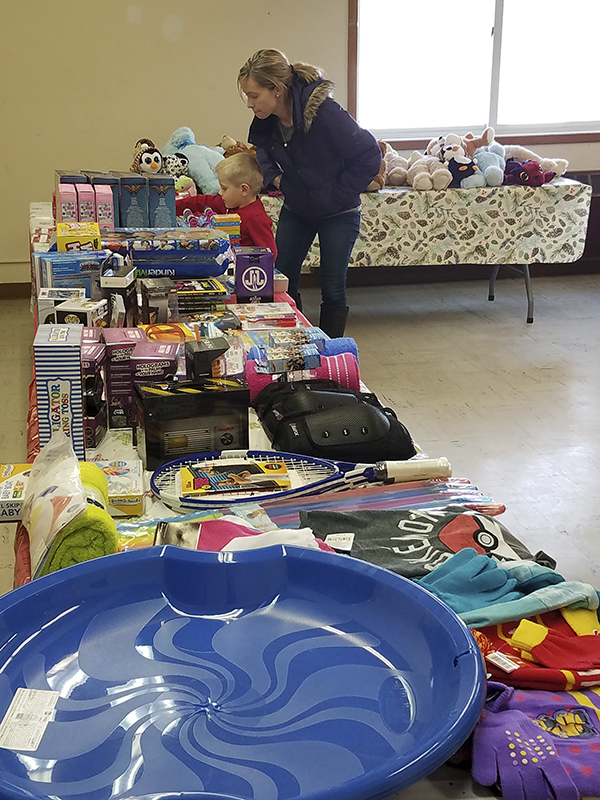 Prizes for Santa Bingo are donated by a community member, and each child who attends walks away with something from the event. Victory Life Church Pastor Diane Butler coordinates Santa Bingo along with Geneva Bar & Grill. Provided

It was a lower number than he expected, but there was just one bid submitted, he said.

Both church councils met that night at the same time: Vibrant Life, to approve a slightly higher bid than the standing offer, and the Methodist church, to accept a bid. They took the bid from Vibrant Life.

“‘Are you out of your mind?’” Stitt said he thought. “‘You’re hardly here a year and you’re thinking of opening another church. Are you a bit stupid?’”

Before putting in the bid, Stitt said he found a person willing to buy the building off them if he was just able to come up with the money up front to pay the Methodist church.

The day after the sale, he also found a person willing to lead the congregation.

When the couple were members of Stitt’s own congregation in Ellendale, there were fewer than 30 people who were members there, Stitt said. He asked people why they came.

“People said they went to the church because Jim and Diane were here, ‘And they were really loving to me,’” Stitt said.

At first, he was nervous to have Butler branch off into her own congregation because of that pull.

“Can I afford to lose these incredible people?” he said. “But then I just prayed about it and God said, ‘… If you plant your best seed, you get the best offering.’ And so as tough as it was to lose them, it was a blessing.”

Those first six months, she said they worked hard to get people in the doors. But at a seminar, she remembers being told to go into the community and do what they were doing.

She walked into Geneva Bar & Grill, which, in December, led Santa Bingo, Butler said. Now, the church and the bar cooperate to put it on together.

Chelsea Hanson, co-owner of Geneva Bar & Grill, said when she took over the restaurant in 2014, Butler was already coordinating Santa Bingo with the previous owner. Hanson has cooperated in continuing it, but she said Butler is the driving force for the event.

“For somebody to keep this going in the community is fantastic,” Hanson said.

The 2018 Santa Bingo had between 50 and 75 children attend at the Community Center in Geneva, Hanson estimated.

“It spreads cheer,” she said.

There’s also the chili cookoff, this year on Feb. 2, where pastors, mayors and firefighters squared off while raising money. This year’s cookoff funds were set aside for supporting youth in Geneva. Additionally, the church is a point of contact for seniors who need nutrition assistance, which Butler said she’s looking to grow.

Through her time as a pastor, Butler said she has seen several situations that made her realize something.

“I just really have to love harder,” she said.

And from what Stitt sees, that love is what impacts the church.

“Pastor Diane and Jim love people so much that right away, people started to come,” he said.

And while the church works to support the community, the community has been doing the same for the church, Butler said. When the building was first purchased, it got a new roof right away. It also has new carpet, and donated tables and chairs.

“Everything has been donated,” Butler said of funds for the projects — and not by congregants.

Thanks to the generosity they’ve been shown, the church doesn’t have debts or a mortgage to pay off, she said. In addition to paying her salary, the church’s overhead is just utilities — if Butler turns the heat on. Often, she’ll do her work at home to save on heating a building with only her in it.

“We want to spend our money telling others about the Lord, not for the heat,” she said.

In the frosty window near her desk, solar-powered dancing figures, each a few inches tall, bob on the window ledge. Cinderella, the Easter bunny, a turkey and an elf all do their own happy dances — gifts from various people who saw the flower, still dancing but close to dormant. Together, they tick softly, like a clock. A snowman in a red hat shimmies steadily.

Butler married her husband in 1976. When they started dating, Jim Butler worked at a chicken farm.

“My grandmother had chickens and she had these roosters that I swear were 6 feet tall, and they would jump on you,” she said.

She said they lost that farm during the farm crisis in the 1980s, but got it back again less than a year later. Still, that time was a reminder that everybody has hurt and struggles in their past — Butler herself lost her mother when she was a teenager. But for Butler, God uses those times to shape people into better ones — people with compassion and love for others.

“How can that (bad time) make me love people more or differently?” she asks herself. “Because we need to love people where they are. And sometimes, that’s in a hurting place.”

They moved away from the poultry farm to work with a ministry in Missouri for a year. They moved to Geneva, then to New Richland for 14 years, then back to Geneva when Butler — who grew up near Blooming Prairie — took the job as pastor at Victory Life.

Together, the couple has eight children, two of whom are adopted. Butler’s husband invited a woman he met through his job to church. She was pregnant at the time, and when the child was still an infant, the Butlers adopted her, Diane Butler said.

At the time, Diane Butler’s youngest child was already 15.

They found a private adoption attorney, and a year later, when the woman’s relative also had a child, they adopted their youngest son at 8 weeks old.

“God supplied the energy and the need,” Butler said.

Both help around the church.

In addition to work in the Geneva church, Butler said Victory Life is attempting to work outside its own community. In February she will return to Myanmar, where the church has already been twice. The congregation also supports a Rural Compassion missionary who travels to support pastors in rural U.S. congregations.

“We’re trying to get all over the place,” she said.

And as she considers how the church’s ministry grows and transforms both with time, she asks God what God wants her and the congregation to do next. She thinks of them as puzzle pieces.

“We don’t know how we’re going to touch other people’s lives, but God has the cover,” Butler said. “He has the outside box. And he knows how we’re all fitting together. And maybe, someday, he’ll show us that.”