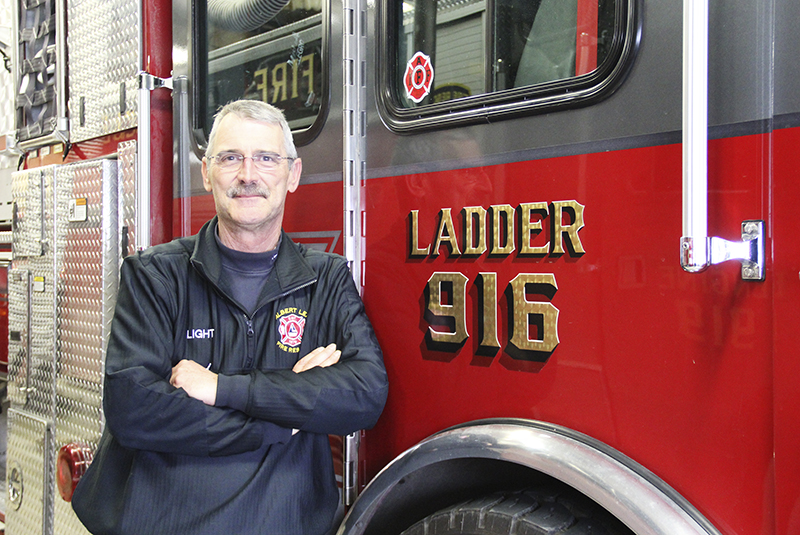 After 21 1/2 years on the job, Albert Lean Mark Light retired last week as a firefighter with Albert Lea Fire Department.

Light, a lieutenant, had worked for the department since 1997 and before that worked for Albert Lea Township Fire Department.

He grew up near Hartland and has lived in Albert Lea since 1983. He said he wanted to be a firefighter since he was a boy.

“All little boys want to be a policeman, a fireman or cowboys,” he said with a laugh. “I just never grew up.”

Though his memories over the years were filled with highs and lows, Light said he is proud to have been a member of the department.

“We always see people on the worst days of their lives,” he said. “But you also know that you are able to do things and have a very positive impact on somebody’s life.”

In addition to responding to fires, he and the other firefighters respond to medical calls and motor vehicle crashes and conduct commercial and rental inspections. They also oversee a reassurance call-in program, which is designed to give elderly or single residents daily contact with the Fire Department.

He said he has enjoyed helping so many people and enjoys seeing people later on that he was able to aid in one fashion or another.

“You realize you did something really good there,” he said. “It bothers us when we can’t, but you don’t quit either — you keep trying.”

He said he will always remember the camaraderie he felt with his fellow firefighters and their strength as a team.

A lover of history, Light has enjoyed doing inspections and seeing how the Albert Lea historical buildings were laid out and put together, along with seeing how they have changed over the years.

Light said his first call with Albert Lea Fire Department was to Western Rentals. The business had a portable hot tub and was having problems with the heater.

Another call from early in his career took place about 20 years ago during Christmas week when a family driving north on Interstate 35 got caught in deep snow and flipped their vehicle onto a bridge pillar.

While typical extrications take 10 to 15 minutes, the extrications that day took one hour and 20 minutes. Luckily, everyone survived, he said.

“You leave something like that, and you say ‘I made a really positive impact on somebody’s life’ — but it was a team job, it wasn’t just me.”

He remembers the Farmland Foods fire in 2001, where firefighters battled the blaze for three days in 95 degrees and warmer temperatures.

He said the call came in at eight minutes after 5 o’clock on Sunday, July 8, of that year, and the last Albert Lea truck left around noon the Wednesday after.

Twenty three departments with 246 firefighters responded, he said, and there were 57 pieces of apparatus used.

In the last decade, he recalled getting called to assist at a fire in downtown Austin where it was 17 degrees below zero when they got called over there that morning.

“There were guys that were literally freezing to the ground if they didn’t keep moving,” Light said.

In addition to his duties as a firefighter, Light said he will be remembered for resurrecting Albert Lea Fire Department’s first motorized fire engine, known as Engine 1, which was made in 1918. It had been on display at Freeborn County Historical Museum for many years but was not functional until he helped pull it out of the museum in 2006, worked on it through the winter that year and got it working again.

It has since been in parades and is housed in the red barn in the village at the museum.

Though he doesn’t have any definite plans yet, Light said he is sure he’ll end up working part time somewhere in his retirement.

Light enjoys going on tractor rides and last year completed a two-day ride out of north Iowa in addition to the annual Shinefest tractor ride locally. He is looking forward to being able to have a more flexible schedule to allow more rides and to restoring and repainting several old tractors he owns.

He also serves as president of the board at Freeborn County Historical Museum.

Interesting fact: born in the same hospital as Eddie Cochran