‘This is just what I’m supposed to do’ 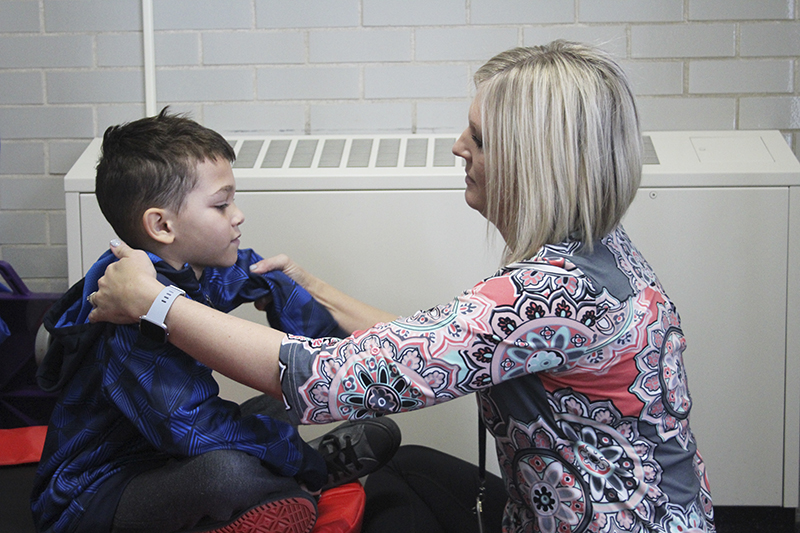 To the unfamiliar eye, it looks like the start of a magic trick: First-grader Seven Hurd is swallowed by a shimmery blue body sock until only his feet poke out. Then, with paraeducator Marcie Forman’s help, even those disappear as the child is enveloped completely in the stretchy fabric.

But rather than disappear, body parts begin to test the limits of the sock — a fist, an elbow and a shoed foot that escapes from the opening at the bottom. Each movement creates tension, then slack as the body sock takes a hit elsewhere. In an entryway just outside his classroom, and with Forman by his side, a caterpillar tests the limits of his cocoon.

Forman is in her fifth year as a paraeducator at Sibley Elementary School, a move she made to sync schedules with her children after 15 years as an infant teacher at The Children’s Center. She spends the school day in first-grade teacher Drew Wanzek’s room, providing support for four students. What that support is? Simple.

For Hurd, he said that could mean help with math or art, helping him rejoin the larger group and giving him the space to calm down — sometimes in the company of his toy frog, Frog-o.

If students need information repeated, Forman does that. She works with them one-on-one and does weekly checks to verify children are progressing. Sometimes, she said, they just need a break.

“Some kiddos, academics are so hard that they just need a break to take a walk and talk and forget about how hard it is to be in school sometimes,” Forman said.

If they need help calming down, Forman does that, too — and well, Wanzek said.

“She does a great job understanding and seeing when students are starting to escalate and trying to, you know, see what they need to be able to regulate themself or if they need a movement break, a sensory break, she’s really good at identifying each of the kids’ needs,” he said.

She knows this matters.

“I think that I just feel like I’m making such a difference,” Forman said. “… We don’t make a million dollars, but every day I get to go home and think about all of their little successes that they made that helped them make it through. Even a day, sometimes, is so hard. So just knowing that I’m helping them, I don’t know … I feel like, honestly, they couldn’t do it without us.”

When Forman graduated high school, she didn’t know what she wanted to do. She starting working at The Children’s Center right away. Her last class of infants are now kindergarteners, some of whom she gets to see at Sibley.

She kept working with children because it’s what she has always done, Forman said. Children are easy to relate to. They don’t judge you. They’re happy to see you. Additionally, the job allows her to spend time with her own growing children: Collin, 13, Caden, 9, and Wesley, 4.

“I feel this is just what I’m supposed to do,” she said.

Although some paraeducators float around the building — as Forman has done in previous years — some children she works with this year often sit at the same table in the same classroom.

“She’s built such a relationship that those students feel comfortable, they feel like they can ask her anything if they start to recognize something or don’t understand something — she’s always right there,” Wanzek said.

For Forman, a big part of that relationship is being someone there to listen to them.

“These kids really need one person and we can make such a difference being that one person,” Forman said. “And the teachers are so busy and so focused on the big picture that we see things sometimes that they don’t see, and they appreciate that so much. But just being there to help them zip a coat can seriously change their whole entire day. … I feel like a majority of the kids that we see nowadays just need that one positive person in their life that can make things seem like they’re going to be OK sometimes.”

But being that one person isn’t always easy.

“Sometimes, when (they) do have bad days, we are their people, so … all of the baggage that they come in with sometimes, we are left to try to figure out quick ways to take it off their plate so that they can get through the day,” Forman said.

But in a world Forman sees losing its human-to-human contact — “You don’t even have to go to the bank,” she said — this is her way of showing up.

Making it easier
for students

When a child needs to tap out from classroom work, Forman can take them on movement breaks. Most of these breaks are scheduled, Forman said, with some flexibility based on student need. They may head to a clubhouse, where there are Legos, puzzles, stress balls, weighted blankets and calming music. They may also do some time in the body sock, on the trampoline or doing wall push-ups.

“I know the kids love her,” Wanzek said. “They look to her for a lot of support throughout the day.”

Wanzek said Forman’s presence in the classroom makes a difference, not only for the students she directly works with, but also for other students in the room.

“Every day, she comes in and she’s high-energy, she’s happy to be here,” Wanzek said. The children pick up on that, he said.

When Forman noticed a child without gloves, she made sure the child got a pair.

“You can tell that she really has a lot invested in not only her students, but the whole class,” Wanzek said.

According to the first-grade teacher, how Forman does her job makes his easier, too. She keeps track of every schedule nuance and knows when her students need to be where. That means Wanzek can focus his time on managing the classroom itself.

Switching jobs after 15 years was no small deal, Forman said. But to make that transition — and still — Forman said she had a group of supportive staff who lift each other up and laugh it off.

In Wanzek’s first-grade classroom, Forman brings that attitude with her.

“She’s a lot of fun to be around,” Wanzek said.

‘I’m having the time of my life’

After time in the blue body sock and before wall push-ups, Hurd sits down on the trampoline and Forman joins him at floor level. She takes his wrists, his elbows in her hands, providing pressure to proprioceptive cell receivers located in his joints. Forman said this exercise — along with Hurd’s time in the body sock — help his body know where it is in space and helps calm the body’s sensory processing systems. It’s one moment in one day, and one day in a school year Hurd said goes better for him with Forman in it than without her.

The good news for Hurd? Forman doesn’t plan on going anywhere anytime soon. She said she sees herself staying as a paraeducator for the foreseeable future.

“I’m having the time of my life working with these kids and it, the people that I work with make it so easy to love it,” she said.