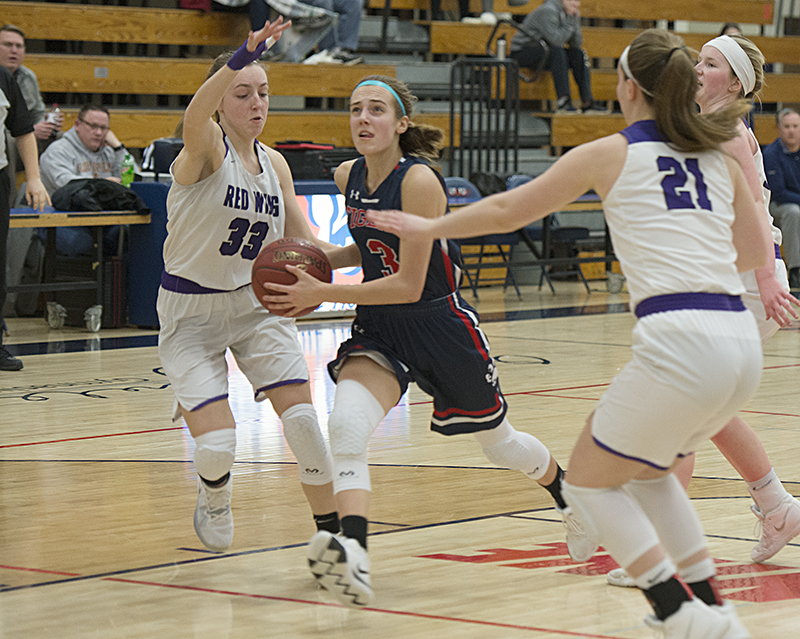 In its final home game of the regular season, the Albert Lea girls’ basketball team faced the tough task of matching up with Class 3A No.1-ranked Red Wing Tuesday night.

Despite playing within single digits of the Wingers for a majority of the first half, the Tigers gave up a big run late in the opening half and were unable to climb out of it before the end of the game, falling 65-37.

Senior Megan Johnson opened the game with a quick layup right after the opening tip. Eighth-grader Kendall Kenis gave the Tigers another lead a few possessions later with a three-pointer, going up 5-4. Freshman Taya Jeffrey and junior Samantha Skarstad kept the Tigers close the rest of the half, scoring the final 12 points for the team.

A big three-point shot from Skarstad brought Albert Lea to within seven points of Red Wing with around four minutes left to play in the half. However, that would be the closest they would come for the remainder of the game.

The Wingers found their offensive game using a mixture of shots from beyond the arc and tremendous post play to end the half on a 12-0 run. The Tigers found some open shots, especially in the first portion of the half, but didn’t hit their mark enough to keep them in the game. 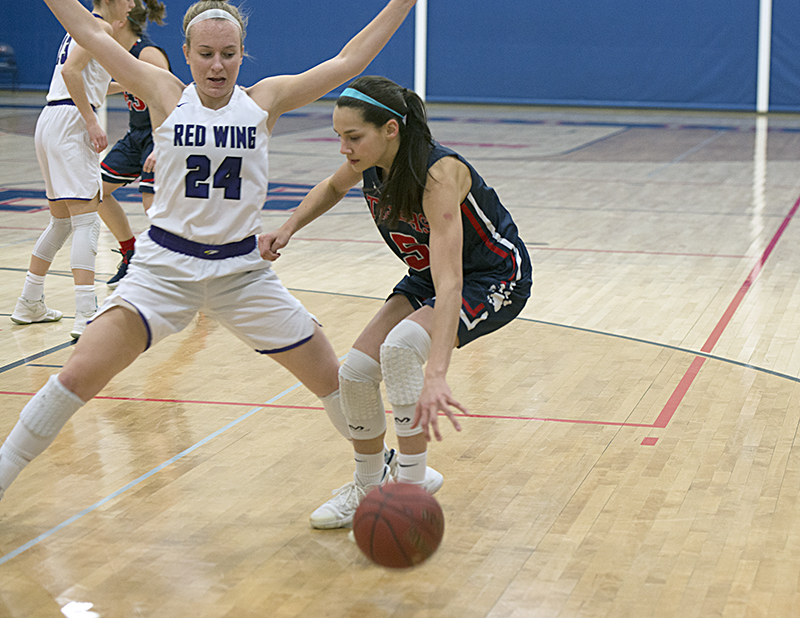 Albert Lea freshman Annika Veldman backs out of some trouble in the first half against Red Wing. The Tigers’ loss drops them to 4-19 with just two games left before the start of sections. – Tyler Julson/Albert Lea Tribune

Albert Lea went to the half trailing Red Wing 36-17. Skarstad led the team with seven points; Jeffrey had five, Kenis three and Johnson finished with two.

The Tigers’ offensive struggles continued in the second half. Skarstad added what she could, but she was the only Tiger to score through the first eight minutes of the half. The Wingers, however, kept their momentum rolling, starting the half with a 12-4 run.

Jeffrey ended the run with a nice move and layup under the basket, but Albert Lea still found itself in a 23-point hole.

Sophomore Mallory Luhring added to the scoring on back-to-back possessions — a three-pointer on the first possessions and a long two on the second — both of which used high banks off the backboard to find their way in. Junior Ashley Butt added a three late in the second half for her first points of the night.

Up by 30 points with under four minutes remaining, the Wingers ran out the clock with long possessions to bring an end to the game.

The Tigers went to the free-throw line a total of 16 times throughout the game, converting on nine of those shots.

Skarstad led with 15 points, while Jeffrey finished with seven; Luhring with five and Butt with four. Junior Jocelyn Strom, Kenis and Johnson combined for a total of six.

The Tigers fall to 4-19 on the season and have just two games remaining before the start of the section tournament. On Wednesday, they travel to Mankato East to take on the 9-14 Cougars before ending the regular season Friday against the 14-9 Spartans of Rochester Mayo.