Minnesota Gov. Tim Walz is proposing a 20-cent gas tax increase in his first budget as governor, an increase he said is needed to address approximately $18 billion in transportation needs statewide. 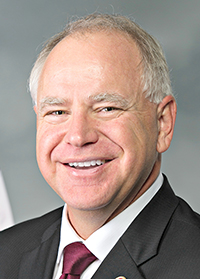 The budget was unveiled Tuesday and needs to be debated by the House and Senate.

In a conference call Tuesday afternoon with Greater Minnesota reporters, Walz said the increase is needed as the state battles approximately $18 billion in transportation needs and a D- transportation rating, causing safety and economic concerns.

“A recent independent report found that there are 1,000 Minnesota bridges and hundreds of miles of road that are in poor condition,” Walz said. “This costs the average Minnesotan over $1,000 a year in gas, lost time and car repairs. And unless we make serious investments, it will only get worse.”

Walz said the current gas tax amount places Minnesota below the minimal average as it tries to maintain the fifth-longest road system in the U.S. He expects the Working Families Tax Credit to mitigate costs incurred by the gas tax increase.

When asked what he would say to a gas station owner about the increase, he said he would note the necessity of taxes to pay for services.

He said people will likely be upset over the increase but noted it is going toward transportation — an essential service.

“Under Gov. Walz’s plan, if you drive a car, you can expect to pay a lot more for the privilege,” her office stated. “From excessive gas taxes to increasing the cost of health care, there’s little doubt that Minnesotans can expect to pay more in this budget, especially those of us in rural Minnesota who have to put more miles on our cars.”

“The gas tax is also indexed to inflation, so there could be future increases beyond 20 cents per gallon,” her office said.

Under the budget, tab fees, the motor vehicle sales tax and business taxes would be increased and reinstatement of the sick tax would occur, “adding $1 billion to the cost of health care for Minnesotans over the next two years,” Bennett said.

The governor is also proposing $100 million to expand the working family tax credit and cutting Social Security taxes by increasing the subtraction in current law.

“Nearly 56 percent of Minnesota seniors would pay no state tax on Social Security benefits under this proposal, and hundreds of thousands more would pay less,” Walz said.

Though 2019 is not considered a bonding year, Walz said he believes every year should include a bonding bill.

He expects to release a bonding bill next week.

Walz’s budget calls for a 3 percent increase in the state’s basic school funding formula for the first year of the biennium and 2 percent in the second year — a total of $523 million.

“The general funding formula is the biggest source of state aid to schools in Minnesota and impacts every student in the state,” he said. “It is also the most flexible aid schools receive, allowing them to make local decisions to meet the unique needs of each student and school.”

The budgets invests nearly $60 million in pre-K and $8 million for full-service community schools. Walz noted it also includes money for workforce training and development programs with a focus on manufacturing, technology, health care services and agriculture.

“My budget includes funding to extend low-cost coverage to thousands of farmers, small business owners and entrepreneurs,” Walz said. “It also provides every Minnesotan with an additional health care option, encourages stability in the individual market and makes health care affordable in Minnesota.”

Walz said he plans to create a subsidy program to reduce monthly premiums for Minnesotans through MNSure by 20 percent. The subsidy is expected to be applied against customer premiums.

He also plans to establish a state-based tax credit to help ensure Minnesotans on the individual market pay nore more than approximately 10 percent of their income on health care and create a statewide public option — ONECare Minnesota — to increase comprehensive health coverage across the state.

Walz’s proposed budget includes a $44 million investment to expand access to the child care assistance program, raise rates paid to providers and improve stability for children in the program. Grants would also be provided to communities facing a lack of affordable child care.

“I am also investing more than $60 million as a set-aside to fund a new program the Legislature is working in to provide access to paid family and medical leave for most Minnesotans,” he said.

An estimated $170 million would be invested to increase affordable housing.

Other provisions in Walz’s budget include:

Expanding background checks on gun purchases and keeping the guns out of the hands of offenders in certain situations.

A $50 per acre property tax credit for farmers who provide buffer strips near public waters and drainage systems.

$70 million in a One Minnesota border-to-border broadband grant program to ensure all households have high-speed internet access by 2021.

Increasing the Family Investment Program cash grant by $100 per month

Modifying the sales tax exemption for local governments and nonprofits for the purchases of construction materials.

Opening four Department of Human Rights regional offices Walz said will promote “diversity, inclusion and racial equity in every corner of the state.”