A hobby turned into a business 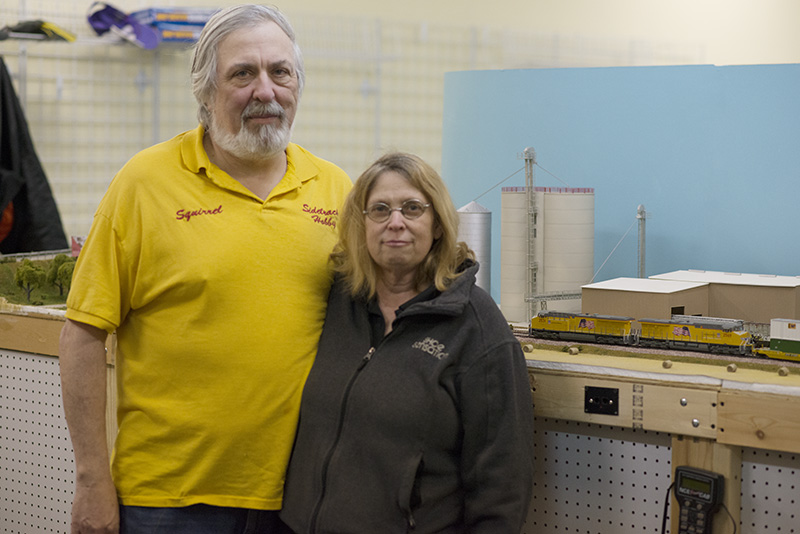 Edwin and Helen Schecklman stand next to the model train setup in the back room of their store, Sidetrack Hobby, located in the Northbridge Mall. Edwin said his goal is to have the setup reach the window at the front of the store. - Tyler Julson/Albert Lea Tribune

Sidetrack Hobby in Northbridge Mall opened in June 2017, selling various parts and kits for model train enthusiasts looking to start or build upon their existing setups.

Edwin Schecklman, the owner and operator of Sidetrack Hobby, has been in love with trains since he was a young boy, working on them with his father.

“It’s just something I’ve always done with my dad, so it really comes from there,” Schecklman said. “He built our first train right out back when I was 6 or 7, and I’ve always had one ever since. It’s just one of those things that’s in the blood.”

He said the best part about setting up model trains is all of the detail that can go into the scenes he creates.

Despite the Albert Lea shop opening in 2017, Schecklman has been in the hobby business since 2006 when he owned a shop in Iowa Falls, Iowa. His wife, Helen, was offered a promotion and forced them to pack up the shop and move to Albert Lea.

Starting as just a small operation, Schecklman said the business kept getting bigger and bigger, allowing him to expand.

“It basically started with just a few bottles of paint and just kept rolling and rolling from there,” he said. “We sell $500 worth of merchandise, we order $600 of more inventory from the profits and that’s the way it’s been going.”

Sidetrack Hobby has walls and shelves filled with different materials for walk-in customers to peruse through, but Schecklman said he does a majority of his business online.

“About 12 percent of our sales are local, the other 88 percent comes from online,” he said. “It would always be nice if we had more local, walk-in traffic, but our biggest challenge is just trying to compete with everybody online. There are a lot of people that buy based on price only, and some that buy based on service. Service we can compete really well at, but pricing is always hard.”

Sidetrack Hobby has sold to different countries and different people all over the world, including singer Jennifer Lopez and professional golfer Payne Stewart.

Schecklman said the best part about owning the store is that he can use and build the models himself, so he can give customers different ideas on how they can set their models up. In the back of his store, Schecklman has a model train that spans the entire room. He said he works on it from time to time and when it’s done will be a replica of the train he drove next to on his trips to see his wife when they first started dating.

“I’m also lucky because I get to work with Nicole (his daughter) most of the time and Helen, when she can be here,” Schecklman said. “And the other thing is, it’s flexible. I can be here at 10 o’clock or I can be here whenever. It’s nice to kind of make my own hours.”