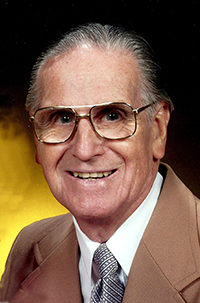 Bernard (Barney) was born Jan. 20, 1924, in Elroy, Wisconsin, to Bernard and Emma (McLain) Murtaugh. He graduated from Winona Senior High School and Winona State University. His graduate work was done at University of Colorado in Greeley. Barney taught in Minnesota public schools in Dover, Hayfield, Claremont and Albert Lea. He retired in 1985 and moved to Winona.

He is preceded in death by his parents Bernard and Emma Murtaugh; wife, Beverly; brother, Robert Murtaugh; and sisters Chloe Lockwood, Cora Reupert and Charlotte Requarth.

Graveside services will be at 2 p.m. Thursday at Woodlawn Cemetery in Winona.

A celebration of life service for family and friends will be this summer at Fawcett Junker Funeral Home.

Services are entrusted to Fawcett Junker Funeral Home and Cremation Service in Winona and Fountain City, Wisconsin. Words of sympathy and remembrance can be given at www.fawcett-junkerfuneralhome.com.