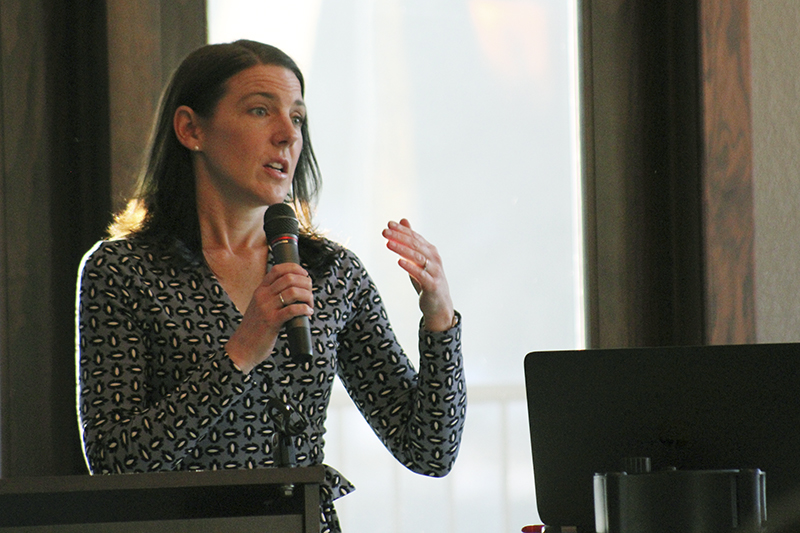 Community representatives left Wedgewood Cove Friday morning armed with more information about the child care crisis, legislative efforts to address it and its impact on the local community.

“Our community really needs to address this, and we can’t wait for someone else to do it for us,” Loch said.

Until recently, child care was looked at as a personal and family issue in the community, Werner said. Now, it is also an issue employers have to consider and be involved in. If parents are not able to find good child care, they may quit work and stay home. She cited child care as the top concern for absenteeism at work.

“Early childhood investment is a two-generation solution,” Sanford said, because it affects both the child and the parent.

According to Werner, approximately 65 percent of greater Minnesota rural areas are dependent on in-home child care providers. The numbers in the Twin Cities area is close to reversed, with 70 percent of the population relying on child care centers.

“Centers just don’t naturally grow up in places of sparser populations, and so we are dependent on family providers and we have to make that work for them,” Werner said.

Additionally, according to a survey conducted by the Center for Rural Policy and Development, Werner reported child care center providers were less satisfied than family providers with the sustainability of their business in greater Minnesota than in the Twin Cities.

“There’s some uncertainty and lack of confidence in their own sustainability,” Werner said.

But while the crisis is caused by a provider shortage, it can not be fixed solely by opening up new child care centers, Hansen said. There are also concerns with finding staff and cash flow.

Providers also need help starting up and expanding, with more technical and business guidance, she said.

According to Hansen, Freeborn County has a shortage of 567 child care slots, and Albert Lea accounts for 315 — over 55 percent — of that number.

Freeborn County was recently selected as one of six for a grant to work with the Southern Minnesota Initiative Foundation in developing and implementing an action plan unique to the local community.

“Freeborn County stood out because you’ve been working on this issue and you’ve already identified some action steps,” Hansen said. “Plus, there’s a real need.”

“Parents can’t pay more,” she said. “Parents are tapped out.”

The main rising cost concerns for family child care providers is food, Hansen said, and for child care centers, it is the cost of staffing.

But those staff members help child care centers keep a low child-to-adult contact ratio in a labor-intensive industry, Sanford said. It is a quality concern, and both Hansen and Sanford said quality is an important thing to retain in child care, as 80 percent of brain development happens in the first five years of life.

“We can’t warehouse kids,” she said. “The solution to this crisis is not simply creating more slots in our community to stick kids in, because if it’s not high-quality, we’re shooting ourselves in the foot.”

Sanford said the governor, state Senate and state House of Representatives all prioritized child care, though each is attempting to address the crisis with a different “flavor.” While the House is focusing on investment and coordination, the Senate focuses are deregulation and family child care.

House committees will soon receive their budget targets, and after those are released, the work will begin on how to make change happen, Sanford said.

District 27 Senator Dan Sparks, who attended the event, said the Senate’s budget targets should also be out soon. He said legislators need to ensure funding makes it outside the Twin Cities metro area.

“I really think that (child care) is going to be a top priority,” Sparks said of the ongoing legislative sessions.

“It’s still a work in progress, but we’re hopeful we can do something that takes the burden off our employees,” Chalmers said.

“There’s no one fix that’s right for everyone,” Loch said. “Our community needs many options.”