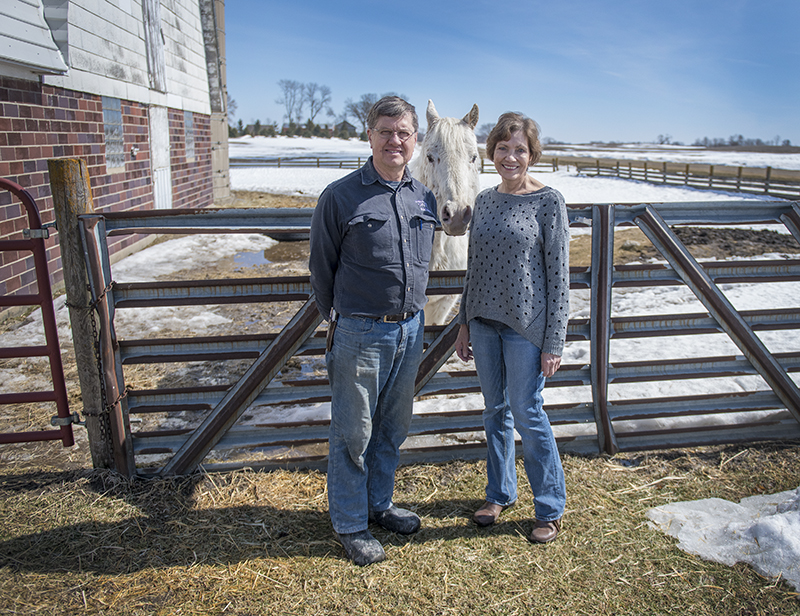 Steve and Linda Kraushaar pose for a picture on their farm Monday with Linda Kraushaar's horse, Bandit. The Kraushaars have been named the 2019 Farm Family of the Year. - Colleen Harrison/Albert Lea Tribune

Couple recognized for work in the industry and community

MYRTLE — Steve and Linda Kraushaar farm approximately 1,500 acres of corn and soybeans northeast of Myrtle with their son, Sean Kraushaar.

They also volunteer extensively in the region, and their work has benefited local residents and those abroad.

“I don’t think that we’re anything special,” Steve Kraushaar said. “It’s nice to be recognized for what we do. And understand that it’s about being involved in the community and volunteering.”

“We love what we do,” Linda Kraushaar said. “We love farming, and we love the organizations we’re in.”

In addition to farming, Steve Kraushaar is a Myrtle firefighter and the couple is part of a team that responds to medical calls, an idea that germinated from a group of local farmers.

The couple attends church at nearby Trondhjem Lutheran, where Steve Kraushaar is a lifelong member.

The first mother who gave birth in the building walked 5 miles while in labor.

Since then, dozens of babies have been born in the facility. Mothers receive medical help and needed treatment.

“Belonging to Trondhjem was part of it,” Linda Kraushaar said of her motivation for helping Haitian mothers. “And farming is part of it. Farmers are passionate people. I caught part of it. And we’re also hopeful people.”

Steve and Linda Kraushaar are board members and volunteer for Real Hope for the Hungry, an Austin-based nonprofit organization that aims to feed families in the U.S. and abroad.

“Participating in the community, giving back, is good for everyone,” Steve Kraushaar said.

The family farm started when George Kraushaar moved to the area in the 1940s and bought land 3 miles east of Steve Kraushaar’s current home. George and Richard Kraushaar purchased the land the couple now lives on in 1973 — the year before the couple married.

Steve and Linda Kraushaar have two other adult children: Scott Kraushaar and a daughter, Lisa, whom they adopted as a baby from Korea.

Steven Kraushaar, who noted he enjoys volunteering with like-minded people, said he has always wanted to farm.

“There isn’t just one quick, easy answer,” he said. “You grow up on a farm, participate as a kid. Most farmers will tell you it’s a way of life.”