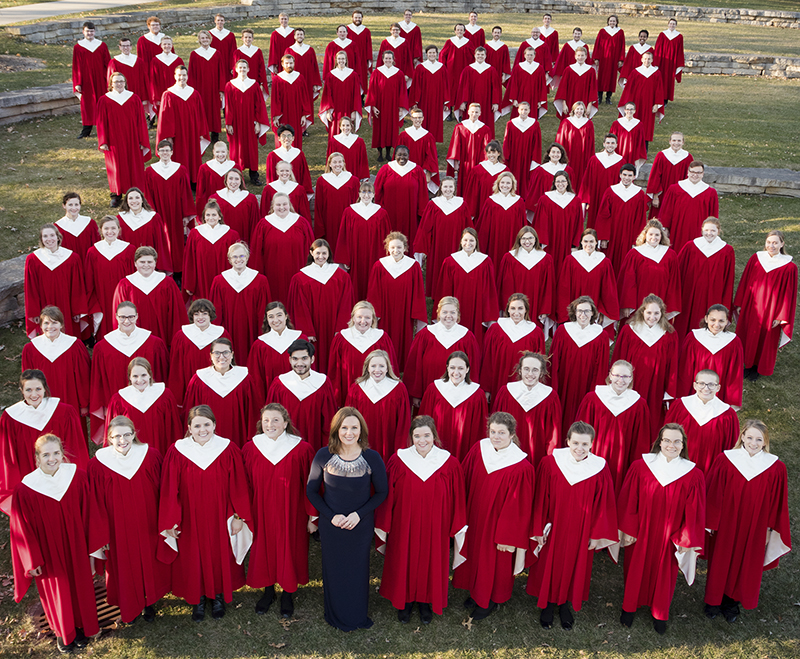 Pictured is the 2018 Luther College Collegiate Chorale, under the direction of Jennaya Robison. Provided

Albert Lea made the list as the first of four stops on the Luther College 90-voice Collegiate Chorale’s 2019 Minnesota tour this spring.

This year’s show theme is “Legacy,” and the show intends to celebrate life and how people want to be remembered. The concert is at 7 p.m. Friday at First Lutheran Church.

She was first looking at pieces that incorporated an afterlife, then a life-and-death sort of theme. It seemed a little bleak, she said.

“What if we could talk about how people want to be remembered — specifically with college students, how they want to make their mark on this world?” Robison said.

She also began thinking of Legacy in terms of Luther College, located in Decorah, Iowa. The school has a Lutheran heritage, so she incorporated music written for the church.

But this year is also the 50th anniversary of Luther College’s Black Student Union. So, alongside the repertoire of music listeners might consider “typically Lutheran” are African-American spirituals, gospel songs and music from South Africa.

“It’s kind of neat to see these two threads interwoven, that we have this really typical western Lutheran heritage alongside our African American history of chorale music as well,” Robison said.

The result is a concert that features music by J.S. BachLeonard Bernstein, Jake Runestad, Stacey Gibbs and John Legend, including the piece “Glory” from the movie “Selma,” which also features the rapper Common.

“It’s not something that you would expect to hear coming out of a chorale ensemble,” she said.

Robison said the concert will vacillate between the old and new.

“The audience is hopefully taken on a journey where it’s interwoven between these different experiences of life and death and heritage,” she said.

The director also asks that no applause be given at the end of each number, allowing the pieces to flow together.

“The story isn’t interrupted by sort of the stop and go of a concert,” she said.

Robison said it has been several years since the choir has performed in Albert Lea. Many Luther students come from the Interstate 35 corridor Albert Lea is located on.

“We try to make sure that we catch a good portion of our close regional demographic,” Robison said.

Her intent is to leave the audience wanting to engage in conversation after the show.

“It’s my hope that … this would evoke questions that this, you know, in the car ride home audience members would be asking, ‘So what do you want your legacy to be?’” Robison said.

Stopping in Albert Lea is a chance to boost a connection with Albert Lea High School, whose students are invited to the Dorian Choral Invitational hosted by Luther College. College organist Gregory Peterson was also consulted on venues he was aware of with good instruments. Finally, choir member Emma Tewes is from Albert Lea.

“That’s another way that we try to find areas where we have students in the ensemble and booking it trying to go to their hometowns, too,” Robison said.

In addition to its evening concert, the Collegiate Chorale will perform at St. John’s Lutheran Community on Fountain Lake Friday afternoon.

The choir will also stop in Roseville, Edina and Rochester.