An Albert Lea man who allegedly set a local automotive business building on fire in early January has been charged with multiple felonies in connection with the incident in Freeborn County District Court.

Court documents state Eggum was charged after a Freeborn County Sheriff’s Office deputy was dispatched Jan. 2 to a fire at Mason Auto Sales, 86974 Freeborn County Road 46. One person lived in the top level of the building. No one was inside when the deputy arrived. 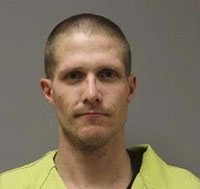 There was reportedly heavy smoke soot throughout the main level of the house, heavy fire damage in the back room and a burnt gas can in the building.

Court documents state a Kossuth County, Iowa, deputy stated the Mountaineer was found in the driveway of a residence. Stolen vehicles were also found on property within 5 miles of the business.

On Jan. 15, a Freeborn County detective reportedly received an anonymous tip that Eggum and a second person committed the arson.

Eggum allegedly said he committed the arson with gasoline and a torch to “hide what he did,” court documents state.

In court Monday, Eggum admitted stealing the vehicles but not the arson. He did not plead guilty to any charges.

Assistant Freeborn County Attorney Abigail Lambert requested Judge Ross Leuning set unconditional bail at $200,000. She said a 78-year-old woman who lived in the building has been displaced by the fire and Eggum has a history of warrants.

Lambert noted the fire caused more than $166,000 in damage to the building alone.

His next court appearance is scheduled for March 21.