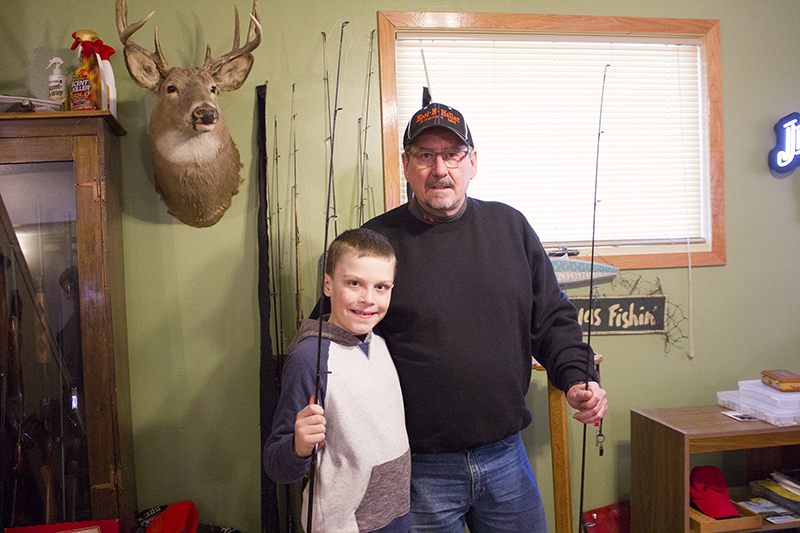 Brad Mellum and his grandson, Tegan Weber, fish together every week in the summer. Fishing is a tradition in the Mellum home. — Sam Wilmes/Albert Lea Tribune

Albert Lea will host its first Governor’s Fishing Opener in May, a four-day event that could bring $2 million in media exposure and draw attention to neighboring lakes.

“In order to submit the proposal, I wanted to make sure that all of my board would be really willing to help out with it,” she said.

Petersen also received positive feedback on the proposal from local fisherman Dick Herfindahl, who has attended past fishing openers, and Shell Rock Watershed District Administrator Andy Henschel, who expressed support for the plan as the district dredges Fountain Lake.

An estimated 80 to 100 fishing hosts are needed.

Preparation for the event is extensive. Eighteen committees relating to the opener have been formed.

A $10,000 Explore Minnesota grant has been received to go toward expenses. 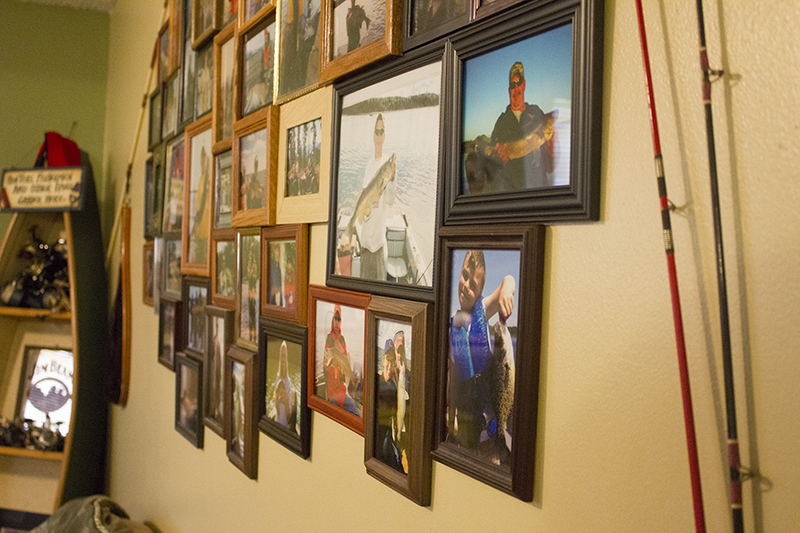 One basement wall of lifelong Albert Lea fisherman Brad Mellum is lined with pictures from family fishing experiences. Mellum plans to volunteer during the Governor’s Fishing Opener in May. — Sam Wilmes/Albert Lea Tribune

‘We’re going to have a pretty good little fishing lake’

“It’s a great deal for the city of Albert Lea,” he said.

Mellum, who has attended numerous fishing openers, plans to be a guide/host for the event and is looking forward to the activities. He said he was “born and raised into this sport,” and his mother owned a fishing and tackle business.

“It’s kind of been in my blood ever since I was little,” he said.

Mellum, who retired in May, said he has had a cabin up North for years and fishes with his grandchildren every weekend during the summer. He fishes in Canada at least once a year and travels to Lake of the Woods in June.

He expressed hope smaller Freeborn County lakes will eventually be conducive to fishing.

“Right now, with the dredging of Fountain Lake and maybe some stocking with the DNR, we’re going to have a pretty good little fishing lake here in Albert Lea,” he said.

Organizers look for exposure from event

“It’s not about our board or a few people or committees, this is all of Albert Lea and all of Freeborn County, showcasing their communities,” she said.

“We want people to come to town that wouldn’t normally come here, to visit, to shop, to eat, to stay,” said another organizer, Mary Nelson.

“The whole purpose, I feel, for the event is pulling people off of (interstates 35 and 90). Why would they stop in Albert Lea? So now we can use all of the media that will be coming in for the Governor’s Fishing Opener event to help us tell the story of who we are and who our community is.”

She noted Petersen has connected drawing tourists to community growth.

“That whole circle is important, because ideally, we want to grow our community,” Nelson said. “People don’t know what Albert Lea has to offer; they might not pull off 35 and 90.”

Organizers have donated time beyond their full-time jobs to ensure the event takes place.

“I’ve met people just from this planning, from this event, that I’ve maybe seen around or kind of by sight, but (am) getting to know them through planning and collaborating,” Nelson said.

“It’s far more reaching than a fishing opener. The opener is kind of the excuse to get the media to town to kind of help us tell our story.”

Petersen, who noted fishing openers have taken place in Fairmont and French Lake in Faribault, noted Albert Lea’s unique status of having some of the southern-most lakes in Minnesota.

“This is a great time to showcase our southern Minnesota lakes, and as they come up on 35 and come up, we’re the first lake that’s in Minnesota, our Albert Lea Lake, so this is a great opportunity for us,” she said.

$10,000 – Amount of an Explore Minnesota grant for  the Governor’s Fishing Opener