Prison for man who led cops on chase, had stolen property

A St. Paul man who reportedly jumped out of a stolen car while it was moving during a chase in November was sentenced to more than 1 1/2 years in prison Friday in Freeborn County District Court. 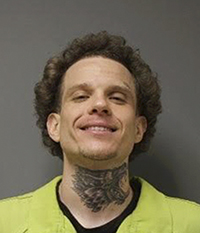 Matthew Dennis Smith, 30, was sentenced after he pleaded guilty in January to possessing stolen property. Smith was given credit for 105 days served and will serve his sentence at Minnesota Correctional Facility in St. Cloud.

In a separate file, Smith was also sentenced to more than 1 1/2 years in prison for fourth-degree assault on a correctional employee. In that file, he was given credit for 87 days served.

Court documents state Smith was charged after an Albert Lea police officer was informed of a suspicious vehicle at about 1:30 a.m. Nov. 30.

The vehicle reportedly accelerated and began sliding sideways after the officer activated his emergency lights in the area of Euclid Avenue and Mill Street. The vehicle turned left onto Wedgemore Drive, going over the curb as it turned, court documents state.

The driver’s door of the vehicle opened while it traveled on Wedgemore Drive, and the driver fled from the moving car, court documents state.

Smith reportedly fled into backyards on Euclid Avenue and jumped a fence at 535 Euclid Ave.

Smith was charged with felony fleeing a peace officer in a motor vehicle, but that charge was dismissed at sentencing.

“It’s the presumptive sentence,” said Freeborn County Attorney David Walker. “We are very restricted as to what can be ordered.”

Walker noted Smith has stated he would rather serve a full prison sentence than be placed on probation.