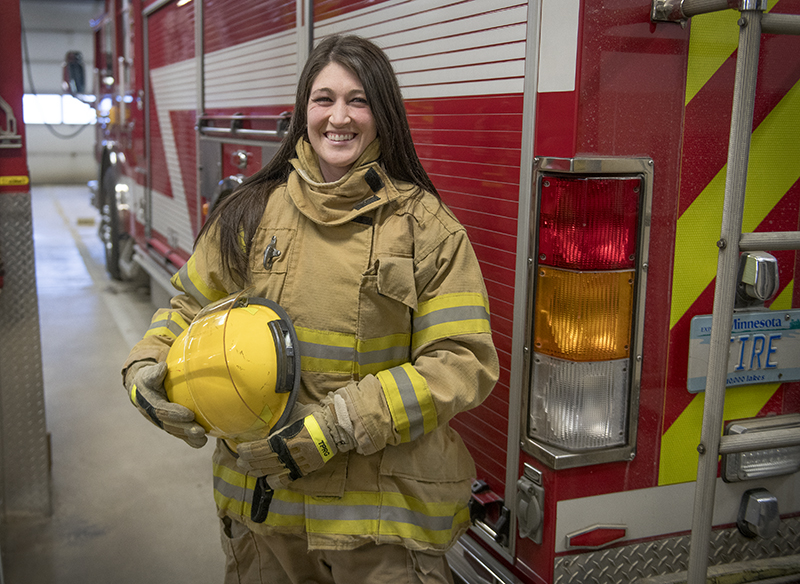 Women firefighters for A.L., Alden share what motivated them to serve

Just one of the team.

That’s what Brandi Hagen, Katie Hallman and Janel Heideman all consider themselves to be as female firefighters on mostly male departments.

“It’s something I’ve kind of always wanted to do,” Hallman said of her reason for joining. She added that she was also inspired to be a firefighter by family friend and neighbor Doug Johnson. Johnson was a building official for the city of Albert Lea and worked as a building inspector and fire investigator, and served on Alden’s fire department for decades. He died in 2016 after battling a massive stroke and brain cancer.

Heideman said being a firefighter is something she had been interested in for a while, and something that meshed well in her role as an EMT. Plus, “fighting fires is fun,” she said. 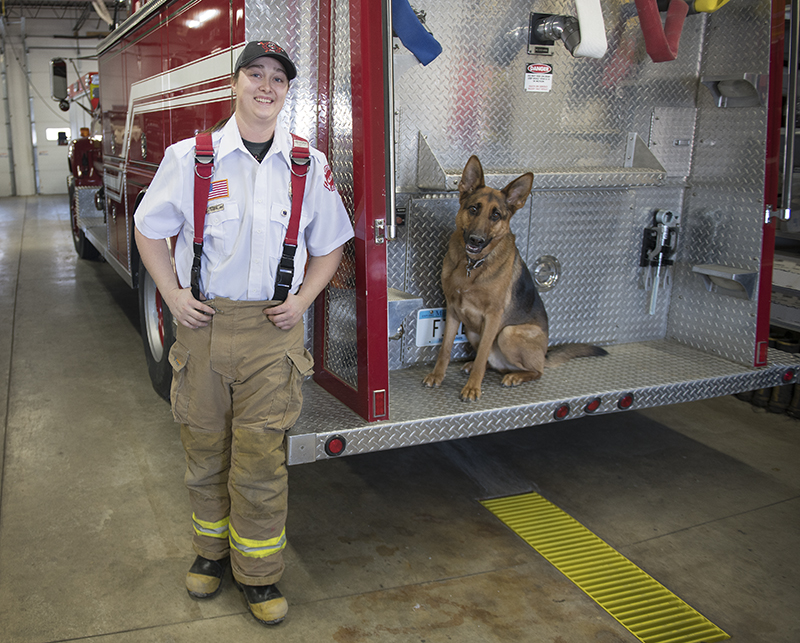 Katie Hallman is an Alden first responder and is working toward her certification to be a volunteer firefighter with Alden Fire Department. She is training her 3-year-old German shepherd, Esuda, towith the hope of certifying him as a search and rescue dog. Colleen Harrison/Albert Lea Tribune

For Hagen, being a firefighter is something she had thought of in the back of her mind for a long time, but was too intimidated to apply. As she’ll be turning 30 this year, she said she has been working to try more of the things she has been hesitant to attempt before.

“Instead of just dreaming about things and saying ‘what if,’ I decided to try it,” she said.

Hagen said her initial goal was to see if she could complete the physical ability test. Not only did she finish the test, she passed it and was offered the job.

“That enough was the gold star, but to get the job?” she said. “Holy crap.”

Hagen won’t be able to do anything officially on the job until she finishes class in April, but she said she has learned a lot from the hands-on training the department has provided for her and her classmates.

“It really gives you a feel for ‘Can I do this?’ instead of just studying a textbook,” she said. “I have so much respect for what these guys do.”

Hagen said she appreciates that she won’t just be thrown into the work and gets to learn gradually. She said she’ll even have a different helmet from others when she does start going out on calls so that other departments will know she’s newer to the job.

As Hallman is on a volunteer department, she has been going out on calls when she can since she joined the department in December 2017. She helps in other ways, such as bringing around air tanks, until she can fully respond to calls with the rest of her department. She carries a pager with her, as do the rest of the firefighters on her department. She is also a first-responder for medical calls, and is training her 3-year-old German shepherd, Esuda, to be a certified search and rescue dog.

While it won’t be easy, Hagen said she is looking forward to getting to a place where she’ll be able to help out her co-workers, and help others in general through being a firefighter.

“I want to be able to give something back in some way,” Hagen said.

Part of being an on-call or volunteer firefighter is finding a balance with other jobs and responsibilities. Hagen runs her own photography studio, Bragen Rights Photography, and waitresses at Perkins. Heideman is a medical death investigator for Freeborn County and works full-time for Gold Cross Ambulance. Hallman works at Northern Country Co-op and also rodeos during warmer seasons. The women have all found a balance of work and life with their multiple jobs, though, they said. 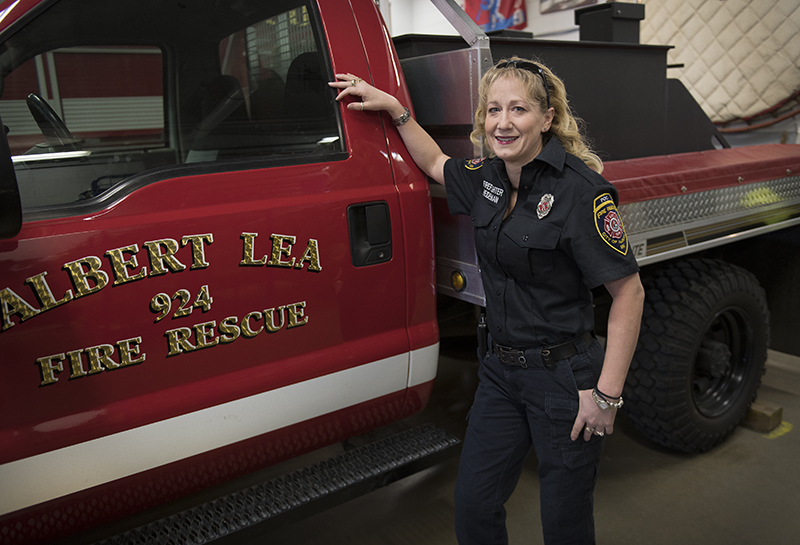 Still, there are some intimidating factors.

One of Hagen’s classes had students with blacked out masks to mimic the minimal to zero visibility firefighters face during some calls. It was chaotic, to put it mildly, she said.

Heideman said some of the things she learned when she was getting certified made her realize how much non-firefighters don’t know about fires. Learning how smoke works through a house, and where and how much water to run on a call are just a few of the things she said she hadn’t thought about before going through her training.

“There’s so much about fire that nobody would ever think of,” Heideman said. “Fire is a whole different world.”

Hagen will be the second woman to join Albert Lea’s department — Heideman was the first. While both women have said they have to do some things differently — using different kinds of leverage to lift certain items or figure out different ways to fire off extinguishers — they’ve never felt their fellow firefighters have held their gender against them.

“Sometimes you just have to try a little harder.”

Some of it isn’t a matter of physically being unable to do something, but just not knowing the mechanics of how to do something or just not having the right mindset, Hagen said.

“You can do anything you want to do, so do it,” Heideman added.

Heideman has never felt her fellow firefighters were anything other than supportive.

“It truly is a brotherhood of people all across the country,” she said.

That feeling of camaraderie rings true for both Hagen and Hallman, as well.

“Being the first female here in Alden, I thought there’d be more challenges,” Hallman said. “We all do a job. That’s what we’re here for.”

Hallman said the Alden department gets together for Thanksgiving and Christmas, and will grill out together after meetings.

“The brotherhood that we have … we’re all a family,” she said. “It’s like a family you take in, and they take you in.”

2 – Different levels of state firefighter certification, according to Katie Hallman

1 –  Year Janel Heideman has been a paid on-call firefighter