Al Batt: Grackles may be abundant in yard, but show population decline 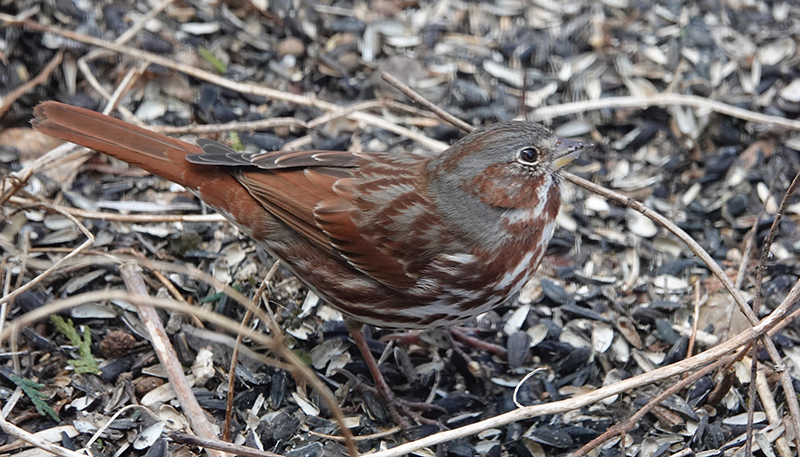 The fox sparrow is a lovely bird that hops forward and then hops back in a double-scratching process of searching for food in leaf litter. - Al Batt/Albert Lea Tribune

“Everything is nearly copacetic. I’m still able to take nourishment. My power was out for a few days and I’d loaned out my generator, so I hunkered down to do some serious reading. Cruella had talked me into reading one of those e-books. It was OK, but I’d have enjoyed it more had they used the other letters of the alphabet, too.”

I enjoy watching the spring bird shows. They change each day. Birds become more vocal, each having a story to tell. I love to hear the vesper sparrow sing the evening vespers, “Listen to my evening sing-ing-ing-ing.”

Male pheasants “crow” throughout the day all year, but especially at dawn and dusk in spring. Roosters also utter a series of loud, two-note calls when they are flushed.

I watched blue-winged teal on the water. These skilled flyers are among the last ducks to return in the spring, but leave early in the fall. The drakes defend mates, but not territories. Because of this, their nests are more concentrated than those of other ducks.

My yard entertained many common grackles. A heap of birds in one lump. They are common and widespread, but the North American Breeding Bird Survey shows a decline in population of 58% from 1966 to 2014. Grackles dab natural insect repellents on their plumage. This includes ants, marigolds, lemon slices, walnut juice and chokecherries.

I spotted a couple of gray partridges in a field. Often called a Hungarian partridge, their North American Breeding Bird Survey populations declined by 60%from 1966 to 2015.

I’d driven by many red-tailed hawks, ever-vigilant and perched on posts, and an old farm place where a wooden corn crib still stood. The slatted walls encouraged the drying of ears of corn. Those gaps made such a crib a giant bird feeder. On the farm I grew up on, red-headed woodpeckers found those corn cribs to their liking.

I saw some rock pigeons. These are the birds that people think of as barn pigeons or the street-smart birds seen in city parks. Pigeons are interesting and smart. Pigeons pass the mirror test. They realize that their mirrored images aren’t real birds. The beginning of Charles Darwin’s “The Origin of Species,” is more about pigeons than anything else. I watched a pair of pigeons kiss. The male grasped the female’s bill and regurgitated food as a courtship gesture. Sweet.

“Why should I watch birds?” Asking me that question is like asking the Burger King if you should eat hamburgers. In this chaotic world we live in, I seek order in its feathered form. When the events of the day threaten to tear the beauty from the world, I find pulchritude in birds. Birds are my treehouse. You should watch birds for every reason you can think of.

“Why do birds come in so many colors?” Because of diet, camouflage, mate selection and genetics.

“What is the biggest bat in Minnesota?” It was supposed to be Miguel Sano of the Minnesota Twins, but he comes into each season preinjured. The hoary bat is the largest weighing over an ounce and with a wingspan of up to 16 inches.

“Where do western meadowlarks nest? I love their song.” It’s a bird of the grass. The species is typically found in open landscapes like pastures, hayfields, grasslands, prairies and meadows where there is a mix of short to medium-high grasses. They nest on the ground, often in small dips or hollows, such as those created by cow footprints. Nests are typically under dense vegetation and can be difficult for us to find. The birds have no difficulty in finding them, which is a good thing.

“How far north can wild turkeys be found in Minnesota?” From sightings people have shared with me, I’d say to the Manitoba border and nearly to Ontario.

“Our goal should be to live life in radical amazement … get up in the morning and look at the world in a way that takes nothing for granted. Everything is phenomenal; everything is incredible; never treat life casually. To be spiritual is to be amazed.” — Abraham Joshua Heschel

“There will always be pigeons in books and museums, but these are effigies and images, dead to all hardships and all delights. Book pigeons cannot dive out of cloud to make the deer run for cover, or clap their wings in thunderous applause of mast-laden woods. Book pigeons cannot breakfast on new mown wheat in Minnesota and dine on blueberries in Canada. They know no urge of seasons, they feel no kiss of sun, no lash of wind and weather. They live forever by not living at all.” — Aldo Leopold, writing of the passenger pigeon in “A Sand County Almanac: On a Monument to the Pigeon”