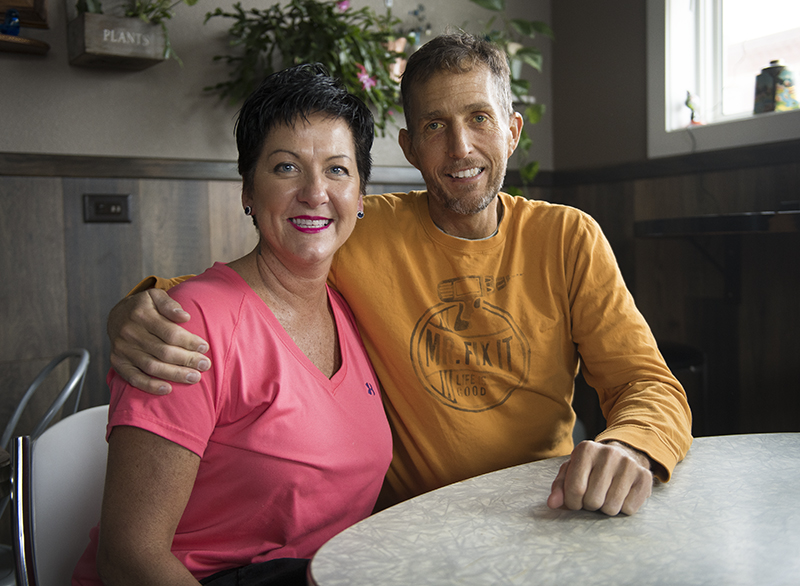 Julie and Alex Marschalk, pictured in their You Betcha Café in Alden, are hoping Alex Marschalk can find a living donor to help his failing liver regenerate. - Colleen Harrison/Albert Lea Tribune

Community rallies behind man in need of liver

ALDEN — You can give the gift of life through organ donation while still being alive yourself.

That’s what the Marschalks would like everyone to know.

Alex Marschalk, now 47, was 9 years old when he was diagnosed with ulcerative colitis, an autoimmune disease of the large intestine or colon that is the result of an abnormal response by the body’s immune system. Cells and proteins that make up the immune system are meant to protect the body from infection. In people with ulcerative colitis, however, the immune system mistakes food, bacteria and other materials in the intestine for foreign or invading substances and sends white blood cells to attack the perceived intrusion. It led to Marschalk having his colon removed about three years ago.

According to Marschalk, 80 percent of people with ulcerative colitis will develop liver disease. He is one of those people.

In 2001, Marschalk was diagnosed with primary sclerosing cholangitis. According to the American Liver Foundation, PSC is a rare, chronic disease of the bile ducts with an unknown cause that results in scars and inflammation of the biliary system. Patients with PSC may develop severe liver problems including cirrhosis, cancer and the need for a liver transplant. The disease is in no way related to alcohol consumption.

Marschalk was able to live with his PSC until about a year ago, when his regularly scheduled lab tests every three months started getting worse, despite ongoing treatment to his bile ducts.

He has been on a liver transplant waiting list for about two years, and remains in the middle of the list, according to his wife, Julie Marschalk.

The couple went to Bangkok, Thailand, in January for Alex Marschalk to undergo stem cell therapy in the hopes of hindering or halting his liver disease. The treatment is supposed to help rejuvenate the liver and encourage it to start rebuilding itself. The couple — along with their 10-year-old daughter, Eva, went to Thailand because the treatment is not currently available in the U.S.

“The main goal of stem cell therapy is to reduce inflammation,” Julie Marschalk said. “They thought if they could get the inflammation down around his liver and bile ducts, that (his liver) might have a chance to regenerate, but I’m afraid it was already too far gone.”

The family was in Thailand for about one month before coming home to Alden and waiting to see if the treatment took effect. Two months later — when evidence of the treatment taking effect should be happening — Julie Marschalk believes the treatment was unsuccessful.

“So, if they’re going to start working, that’d be great, because he’s already been in the hospital a couple times since we’ve returned,” she said.

Alex Marschalk has been in the hospital for internal bleeding and blood clots since the family’s return from Thailand, and he had to have a stent put into his liver last week to relieve some of the pressure in his circulatory system.

The downturn in his health has had obvious impacts on Alex Marschalk’s life. A corn and soybean farmer, he has had to cut back on what he does and will have to continue to do so due to his decreasing energy levels. He hasn’t been able to help his wife as much with things at home, or with the business she owns: You Betcha Café in Alden. His skin and eyes have more of a yellow tint to them and he has lost weight despite eating regularly.

“The 18-hour days are kinda hard to do anymore,” said Alex Marschalk, who is also on the Alden-Conger school board.

“I don’t know how much help you’re going to be,” Julie Marschalk said to her husband of 15 years. “I don’t think you should push it so much.”

It has been frustrating for Julie Marschalk — previously a nurse for 30 years up until last year, when she opened the cafe — balancing everything and shouldering more of the family workload. It has led to their daughter helping out more around the house.

“Therefore, my 10-year-old daughter, she doesn’t really get to be a 10-year-old because I need her help,” she said.

The situation has made the Marschalks even more proud of Eva, though, they said.

Julie Marschalk said their daughter, although sometimes more oblivious to the severity of her father’s disease, has been very resilient. They haven’t seen the circumstances bring their daughter down too much, they said, but there are times when she realizes the weight of what her father is going through.

“Just last night was the first time, when he was sleeping — and he’s so very much more jaundice now than he was two days ago — that was the first time that she asked me if (he was) going to die,” Julie Marschalk said. “And I said, ‘I certainly hope not,’ and that we’re looking for a liver. So, yeah, she’s more aware now, now that he’s clearly more ill and keeps losing weight despite eating more.”

According to the couple, Alex Marschalk has a 13% chance of finding a cadaver donor — a liver from someone who has passed away and is an organ donor. His blood type makes things difficult. Being Type O-, Alex Marschalk is a universal donor but can only receive other Type O (any type) organ donations. He has a better chance at finding a living donor — someone with any Type O (O, O+ or O-) who is between the ages of 18 and 60 years old and in good health to donate a piece of their liver.

April is National Donate Life Month, and the Marschalks are hoping that inspires and educates others to realize they can be donors while still alive.

“So, we put the word out, just on Facebook so far, about needing people to consider donating — and even if not to (Alex), to others,” Julie Marschalk said. “This is the month of awareness for donating.”

The couple has gone through both sides of the family to see if anyone could be a match. Other than waiting on one of Julie Marschalk’s brother’s test results to come back, they’re still holding out hope for a donor.

According to Julie Marschalk, someone donating part of their liver would be in the hospital three to five days and would be back to work within six weeks. Alex Marschalk said the donor’s liver would completely regenerate within two months.

For Alex Marschalk on the receiving end, he would be in Rochester for about three weeks — in the hospital for five days, and then in a transplant house or a nearby hotel for three to four weeks. He would need about three months to determine if the transplant was successful and not rejected.

While it has been a trying time the past few years, the Marschalks are hopeful. It helps to have family, friends and a community rallying behind them, they said. Alex Marschalk has had and will continue to have help farming, while Julie Marschalk has said she is thankful for employees Paulette Rasmussen and Mary Stoneback helping at the cafe, saying she couldn’t have kept it open without them. The elementary school was understanding while the family was in Thailand and let Eva do her schoolwork there — she ended up being a week ahead of her classmates when she got back, thanks to multiple snow days for Alden-Conger. Alex Marschalk’s mother lives close by and helps look after Eva when the Marschalks need to be in Rochester for doctor visits. Community and family donations and a GoFundMe page helped pay for the Thailand trip, as none of it was covered by insurance.

“The community has been really good about helping out,” Julie Marschalk said.

As the family has been going through everything, multiple people have told them they didn’t realize they could be living donors.

“It’s really gratifying and overwhelming, the number of people that have gone to get their blood tested to see if they’re an O blood type, wanting to help,” Julie Marschalk said.

Could you be a match?

Those interested in the possibility of being living donors can fill out a questionnaire at mayoclinic.org/livingdonor. Those with questions can contact LIVINGDONORORGANTP@mayo.edu or 866-227-1569.