Memorial services for Beverly McMullin will be at 2 p.m. April 13 at First Lutheran Church in Albert Lea. The Rev. John Holt will officiate. Friends may greet the family one hour prior to the services. Interment will be in Hillcrest Cemetery. Beverly McMullin passed away Tuesday, Dec. 25, 2018, in Springdale, Arkansas, where she lived with her son and daughter-in-law in recent years. Beverly, formerly of Albert Lea, was born Jan. 5, 1929, in Albert Lea, the daughter of Ervin and Gladys (Wefald) Toenges. Having been raised on the family farm near Alden, she attended the rural Buckeye School and graduated from Alden High School in 1946. She was baptized, confirmed and married at First Lutheran Church in Albert Lea. She was united in marriage to Ray G. McMullin on Nov. 27, 1947, and together celebrated 66 years of marriage. They were blessed with two loving sons, Michael Ray and Randy “Blu” Ervin. 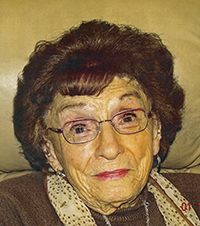 After graduation she was employed at Interstate Power as secretary to the chief engineer. After a move to Northwood, she worked at the Agricultural Stabilization and Conservation Service office until she moved with her family to Waterloo, Iowa, where they lived for 42 years. In Waterloo, she was employed at Rada Cutlery Manufacturing as office manager for 36 years. After retiring she was a partner with her husband in the Rada retail mail order business. Beverly was an active member of St. Ansgar’s Lutheran Church, Allen Hospital Auxiliary, ABW and was a Cub Scouts leader, all in Waterloo. In 1991 they moved back to Albert Lea to care for Bev’s mother and back to First Lutheran Church, where she was active in church council, life and growth commission, Caring and Sharing, Joyful Readers Book Club and Mission Circle 31. She was a member of the American Legion Auxiliary, very active in the care of her family and delivered Meals on the Go. In the last years with her three-wheeled walker, she made visits to all the nursing homes.

Beverly is survived by her sons Mike (Audrey) of Springdale and Randy (Jan) of Fort Smith, Arkansas; grandsons Sam of St. Paul and Tim of Grand Rapids; brother, Rolland Toenges, of Edina; sisters-in-law Marilyn Davidson of Orlando and Helen Stiles of Colorado Springs, Colorado; cousins Steve (Janet) Bergo of Littleton, Colorado, Beth (Larry) Zarian of Superior, Colorado, Laurie (Scott) Barrett of Burlington, Wisconsin, Amy (Drew) Balcan of Bloomington, Indiana, and Warner (Sara) Bartleson of Orville, Washington; and many loving nieces, nephews and a host of loving friends. She dearly loved her family and was very proud of them.

Beverly loved her Lord and had a deep faith and lived it. “Celebrate her passing by closing one door and opening another where we will all be together one day,” her family said.