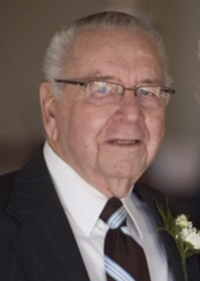 A memorial service will be at 2 p.m. Thursday at Bruss-Heitner Funeral Home in Wells. The Rev. Don Malinsky will officiate. Visitation will be one hour prior to the service at the funeral home. Military honors will be accorded by the Freeborn American Legion post. Interment will be in Freeborn Cemetery in Freeborn. Bruss-Heitner Funeral Home in Wells is assisting the family. To leave an online condolence, visit www.brussheitner.com.

Edward Harold was born Aug. 9, 1929, in Freeborn Township, Freeborn County, the son of Harold and Marie (Hoien) Quinn. Edward was united in marriage to Doris Ann Schewe on March 30, 1954, at Concordia Bear Lake Lutheran Church. Edward worked at Woods Produce in Freeborn and at J.C. Penney in Albert Lea for several years. He was a custodian at Freeborn High School for many years, later retiring in 1994. He enjoyed fishing, camping and spending time with his family. Edward was a member of Freeborn United Church of Christ until its closure.