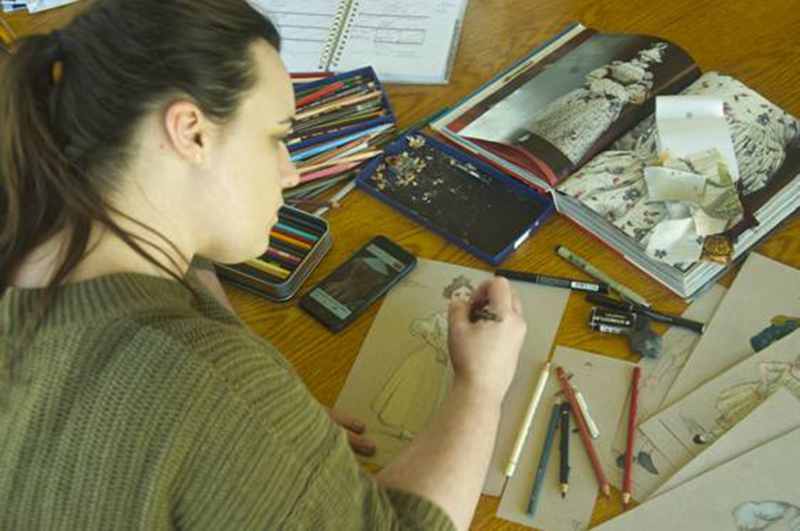 Kelsie Bias draws a sketch of a costume she is designing. - Provided

Area native Kelsie Bias, a freelance costume designer, will join the ensemble of artists displaying work at the Wells Art Expo from Friday to Sunday at Wells Community Center.

Bias began drawing and making clothes for her dolls, friends and herself since she was a child, but she said it was two specific events that happened in high school that had a significant role in pursuing costume design. Watching bonus footage from “The Lord of the Rings,” she realized there was an entire industry dedicated to making costumes, along with seeing “Pride and Prejudice” at Guthrie Theater.

The costume designer for “Pride and Prejudice” was Mathew LeFebvre, who taught at the University of Minnesota-Duluth. She read his biography and saw it was possible to go to school for costume design.

Years later, LeFebvre asked her if she had thought about going to graduate school for costume design after seeing some of her work. This, she said, was the first time she thought she could seriously design costumes for a living.

In the years since, she has  taught at University of Minnesota-Duluth and created a long resume of freelance costume design work. She is currently working on costumes for the opera “The Elixir of Love.”

Bias said she looks forward to coming home for the show and hopes to introduce the art of costume design to others.

“Costumes and clothing is one of those art forms that’s hidden right in front of us,” she said. “I also think anything that helps bring beauty into people’s lives is a good thing.”