Jean M. Severson passed away Wednesday, April 17, 2018, at Thorne Crest Senior Living Community after a short battle with cancer. Funeral services will be conducted at 11 a.m. Tuesday at Grace Lutheran Church by Bonnerup Funeral Services. The Rev. Jennifer Gonsalves will officiate. Interment will be at Lakewood Cemetery. Visitation is at Bonnerup Funeral Services from 5 to 7 p.m. Monday and one hour prior to the service. 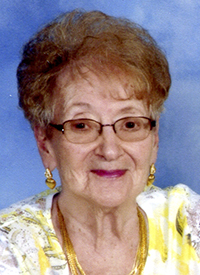 Jean graduated from Albert Lea High School in 1944 and after graduation went to work for the Navy Department in Washington, D.C. Upon returning she worked as a department manager for Wilson & Co. for 12 years and then for Streater for 28 years, holding many managerial duties and retiring as an administrative aide to the president, Howard Scott. Jean married Oscar Severson at First Lutheran Church in Albert Lea.

Jean was a member of Grace Lutheran Church for 62 years and served two terms on the church council. She was a charter member for Grace Foundation and served for 32 years as the financial recorder. Jean was a member of the American Legion Auxiliary, Naeve Hospital Auxiliary, past president of the DOES Drove No. 70 and a lifetime member of the Humane Society. Jean loved playing bridge and reading and also metal detecting, with an occasional trip to the casino. Family and church was the center of her life, especially Sunday morning breakfasts with her family.

The family would like to thank St. Croix Hospice for all they did for Jean.

Memorialsare  preferred to the Humane Society of Freeborn County and St. Croix Hospice in Mankato.