Kensett man turns himself in on warrants tied to chase

A Kensett man turned himself in on multiple warrants Friday after reportedly leading authorities on a high-speed chase in Worth County a week before. 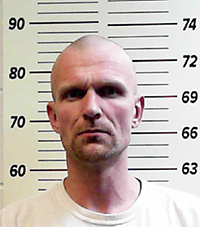 Driving with a suspended license

Failure to yield to an emergency vehicle

Failure to maintain a reasonable and proper speed

He was also booked on an outside warrant for violation of parole.

A deputy reportedly attempted to stop Devries in a 2005 Red Dodge Ram 2500 near the intersection of U.S. Highway 65 and 400th Street on March 22. The incident turned into a high-speed pursuit heading north into Kensett on Highway 65, reaching speeds of approximately 90 mph, according to the Worth County Sheriff’s Office.

The pickup turned east onto First Street and then north in the alley with the deputy close behind.

The vehicle attempted to drive through a backyard at 103 Maple St. but got stuck in the snow. Devries reportedly then got out of the driver’s seat and ran from the scene, leaving two passengers inside the truck. The deputy chased after Devries on foot for a short distance before returning to the pickup to detain the two passengers.

The backseat passenger, identified as Jennifer May Johnson of Charles City, Iowa, was arrested on an out-of-county warrant. The front seat passenger was released.

At that time, charges were filed, and a warrant was issued for Devries. Devries turned himself in a week later.