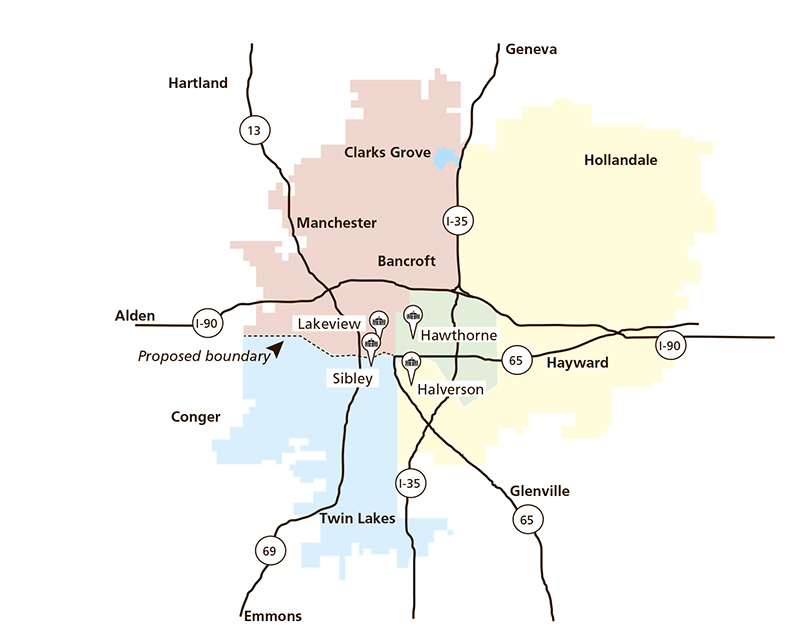 While parents and administrators agreed on the need for action addressing crowding at Sibley Elementary School, how that solution should come about was still up for debate.

Options presented at Thursday’s listening session were the same as those presented at both of April’s school board meetings: address verification, change in school designation policies for future open enrollees and a boundary shift between Sibley and Lakeview elementary schools that would move future first, second and third graders from Sibley to Lakeview while future fourth and fifth graders continued at Sibley.

Should the school board decide to shift the boundary line between Sibley and Lakeview, families living north of County Road 46 — excluding Clarks Grove students — would have their future first, second or third graders moved to Lakeview.

Albert Lea Area Schools Superintendent Mike Funk said the proposals are about increasing opportunity and achievement for all children.

“As part of that, we want an equitable experience for our kids across the district,” Funk said. “… Doing what’s best for our kids really drives a key, key part of our decisions here.”

Currently, Executive Director of Administrative Services Kathy Niebuhr said, students at Sibley do experience things differently than those in other buildings.

The media center is used for several classes, the art teacher does not have a classroom as they do in other buildings, and teachers are working out of former custodial closets and, in one case, a room that also houses their water softeners, Schultz said. Because two special education teachers are working out of what used to be a coat closet, the kindergarten coat closet is now in the hallway.

Emma Habben, who attended Thursday’s meeting, said she was one of those teachers who moved around when she worked for the district previously.

“It is really hard on the kids and I had a really hard time keeping their attention,” she said.

She and several other parents said they are not advocating for the status quo at Sibley Elementary School and recognize something needs to be done.

Habben’s son will be in kindergarten next year. She thought he would attend Sibley, but if the boundary would change, he would be headed to Lakeview in the fall.

“Wherever there’s room would be better than in the hallway,” she said.

The proposed boundary shift would address an over-capacity at Sibley and an under-capacity Lakeview, Niebuhr said. With the shift, next year’s population at Sibley is estimated at 356 with 380 at Lakeview, which has a larger capacity.

The shift would affect approximately 56 future first, second and third graders as well as several kindergarteners, whose enrollment numbers change daily but were at around 15 in mid-April, Niebuhr said.

Without the shift, Lakeview Elementary School would have approximately 309 students, while Sibley would have around 427.

Other parents asked about open enrollment shifts and proposed Clarks Grove students be moved back to Lakeview. Students attending Albert Lea from Clarks Grove — who do live within the district’s boundaries — were moved from Lakeview to Sibley in 2013.

“We have done a lot of calculating and recalculating,” Niebuhr said of potential boundaries and enrollment shifts.

However, the population of Clarks Grove students is not as high as it used to be, and moving those students would not solve the full problem, Funk said.

Additionally, school board member Jill Marin said the board told Clarks Grove parents at the initial shift in 2013 that it did not want to be moving their students back and forth.

Parents also expressed frustration about address verification. Belinda Krysan estimated everyone she speaks with knows a half-dozen or dozen families who are not telling the truth about where they live so they can attend a different school. She is a proponent of address verification for district residents.

“I really, really, really want the school board to look at that before you make this change,” she said. “… It’s just not fair. I don’t want to move my kindergarten and first grader to a different school when they don’t have to when we’re being fair about it.”

Some also expressed concern about a lack of alternative choices to the Sibley boundary shift as a full solution to crowding concerns.

“The board has made no decision on this whatsoever,” Funk said. “… As the administration, we did not just say, ‘Boom, we’re gonna move these kids.’”

Parents Robert and Kasey Wolters said the meeting left them with more unanswered questions. They know the school is overcrowded, Kasey Wolters said, and she wants what is best for students. But she would have liked to see more potential switches, and Robert Wolters is concerned the plan would not be sustainable long-term.

While the couple’s future kindergartener does not have to worry about moving away from his friends at school, his transportation to school would be affected by the shift, Kasey Wolters said. The potential boundary change could mean he would not be bussed to school as he would no longer cross a major highway from where they live. Someone would need to take him to school or he would have to walk, and you cannot ask a kindergartener to walk to school alone, Robert Wolters said.

School board member Kim Nelson requested that Niebuhr and Funk provide data in the form of open-enrolled and Clarks Grove students numbers at the next school board meeting as a point of reference for the upcoming decision.

Craig Kysan suggested the district move the fifth grade class to Southwest Middle School, which Funk said currently has the most capacity in the district.

While Funk said the board will consider and revisit placement of open enrollees and Clarks Grove students, he said after the meeting that moving students from the fifth grade at Sibley to Southwest Middle School is “not going to happen” as it would not create an equitable experience for fifth graders district-wide.

“I’ve got to assume that everybody here is not content with the current arrangement at Sibley,” school board member Neal Skaar said during the meeting. “… The question then becomes, ‘Who’s gonna go?’”

Funk said after the meeting that his recommendation to the board is to approve a boundary shift between Lakeview and Sibley elementaries.

“This is the best long-term solution for the district,” Funk said.