A celebration of life open house for René Davis will be from 5 to 8 p.m. Friday at Bonnerup Funeral Service in Albert Lea. Come tell stories, laugh and share a drink with the family in René’s honor. 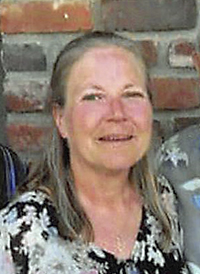 René Suzanne (Stephenson) Davis was born April 3, 1960, in Long Beach, California, to George and Joan (Ater) Stephenson. She grew up in California and enjoyed going to the beach, surfing, skiing, softball and volleyball. After she graduated from high school she took some culinary courses at the local community college.

On Oct. 18, 1980, she was united in marriage to Randy Davis. The couple was blessed with two children. In 1981, Randy moved the family to Albert Lea and they had been residents ever since.

René was a cook at Perkins for 32 years. The last couple years she spent working at Mrs. Gerry’s. Outside of work, René enjoyed traveling, camping, fishing, motorcycle trips and reading Stephen King novels. René always had pets, and especially loved her cats. She was sarcastic, supportive, caring and always thought of others before thinking of herself. She loved the sunshine, but nothing made her day brighter than when she got to spend it with her family. Any time the family was together, René was happiest. Actually, she was happy all the time — except from November through March. Winters in Minnesota were not her favorite.

She is preceded in death by both parents, George and Joan; granddaughter, Ashlynn Akin; and sister-in-law, Darla Clark; as well as several cousins, aunts and uncles.

René is survived by her husband of 38 years, Randy; children Nick (Ricki) Davis and Alicia (John) Schultheis; grandchildren Brydan, Connor, Annabel, Ariel, Alec and Asher; brothers Rick (Dede) Stephenson, Randy (Cheri) Stephenson and Robby (Liz) Stephenson; and the entire Davis side of the family, which are too many to list. She is also survived by many aunts, uncles, nieces, nephews, extended relatives and friends.

Blessed be the memory of René Suzanne Davis.