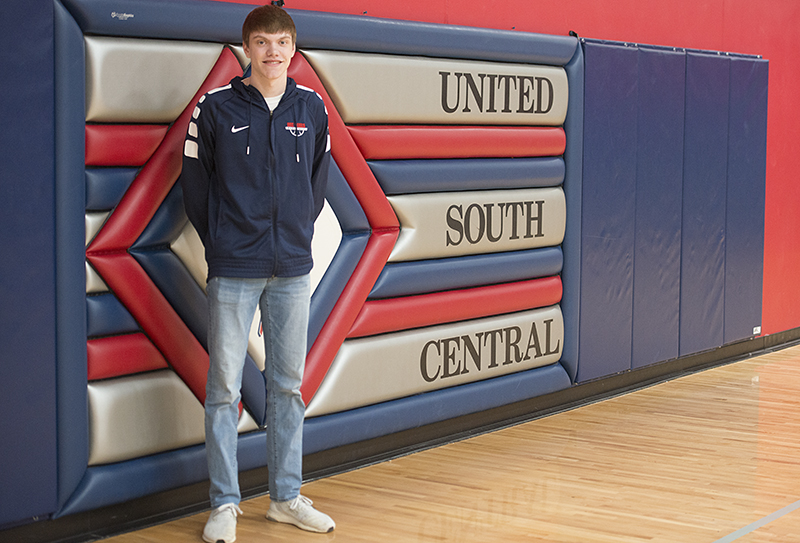 WELLS —  After leading the area in points scored, United South Central junior AJ Kloos has been named the Tribune’s boys’ basketball Player of the Year.

The junior scored 486 points on the season, averaging 18 per game, while also pulling in nine rebounds per game — nearly averaging a double-double on the season.

Kloos talked about how he thought the season went for himself and the team.

“Right away, we started out pretty good and got our confidence up,” Kloos said. “We ran into a few obstacles, but it was still a good season all around. We came up a little short in the playoffs, but we still had fun and it was a great year.”

The Rebels went 14-13 on the season and were ousted in the first round of the Section 2A playoffs by Nicollet, but Kloos and the Rebels will be back next season looking for redemption.

According to Kloos, his favorite moment of the season was his game against Loyola, in which he scored 37 points. He also had a stretch of nine straight games where he recorded a double-double. However, what Kloos really loves about the sport of basketball is the comradery with his teammates.

“My favorite part is going to practice with all of my friends,” Kloos said. “Just being around my friends and coaches made this season a lot of fun.”

Kloos said he is participating in a number of leagues this summer to help him further develop his skill set. He also said hitting the weight room and shoot arounds constantly are going to be key in improving before next season.

“AJ has made big strides mentally this year,” said head coach Taylor Ovrebo. “He hit the weight room a lot and played AAU last summer and you could tell that when we started practice. Right away, the first practice this year, he started setting the tone and started to become a leader. It’s special to have a kid who can score the ball inside and out. He’s got a lot of potential and I don’t think he’s reached where he wants to be at yet. We’re really lucky to have him for another year.”

Ovrebo also praised Kloos’ ability to guard every team’s best player — no matter what position they were playing. He said Kloos had the defensive ability to shut down any player who started getting hot from the field.

The Rebels graduated five seniors from the team this season. However, more than a handful of underclassmen are waiting in the wings to take over. Kloos will undoubtedly play a major role in the success of the team moving forward.