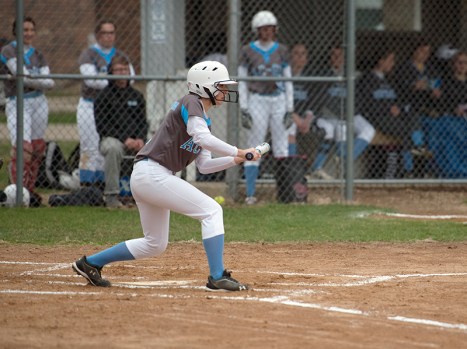 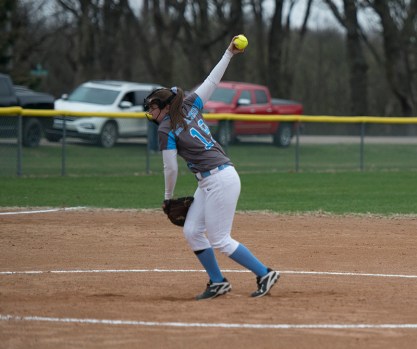 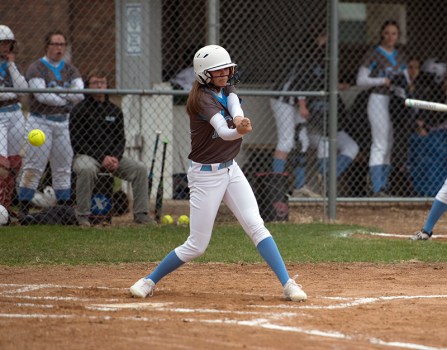 Alden-Conger/Glenville-Emmons sophomore Kylie Korman swings at a pitch Monday afternoon against Kenyon Wanamingo. Korman was 2-4 in the win with a triple. - Tyler Julson/Albert Lea Tribune 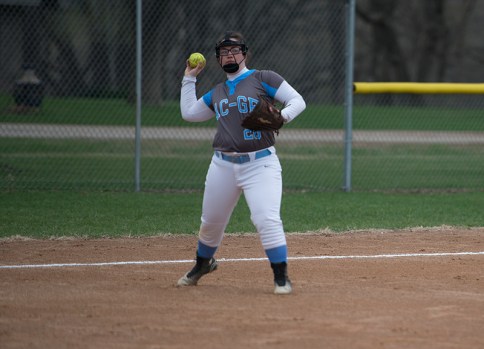 Sophomore Lacy Peterson makes the throw from third to record the out at first Monday night at home. - Tyler Julson/Albert Lea Tribune

Despite trailing 3-0 entering the fourth inning, the Wolverines clawed their way back into the game, eventually downing the Knights 8-7 in extra innings.

The Knights wasted no time scoring their first runs of the game with a two-out RBI single in the top of the first.

It took a few innings for the Wolverines to find their rhythm at the plate, not getting their first base runner on until the fourth inning. In the meantime, the Knights added another two run to their total taking a 3-0 lead.

Junior Kennedy Severtson led the bottom of the fourth inning off by reaching first on a bunt. Severtson advanced to third after another bunt from sophomore Kylie Korman and a walk from sophomore Grace Erickson. A wild pitch scored Severtson and sophomore Lacy Peterson brought in another after a one-out single. Sophomore Kaetlin Bendickson stepped up two batters later and hit a line drive triple that scored another two runs and gave the Wolverines a 4-3 lead.

Kenyon-Wanamingo took the lead right back in the fifth, however, thanks to two singles, a walk and a wild pitch. Not to be outdone, Alden-Conger/Glenville-Emmons came back in the bottom of the inning to take the lead again. Sophomore Abbie Theusch reached first on a bunt and two sacrifice bunts by teammates Severtson and Korman had her on third. Another wild pitch from Kenyon-Wanamingo scored Theusch, and sophomore Grace Erickson followed it up with a big triple. Senior Megan Linn hit a single in the next at bat to score the run and take a 6-5 lead.

The Knights added a run in the top of the sixth to tie the game and the score would remain there until the end of regulation. The Wolverines had a chance to end things in the seventh when Korman landed on third base after a one-out triple, but two strikeouts left her stranded and sent the game to extra innings.

In the top of the eighth, the Knights put two runners aboard, but left them on the bases — keeping the game tied at 6-6. Sophomore Lacy Peterson reached base on a walk to start the bottom of the inning and freshman Mallory Ignaszewski stole two bases as her pinch runner. Another wild pitch came back to haunt the Knights, as this time it brought in the winning run.

Bendickson pitched the whole game for the Wolverines, completing eight innings of work and allowing six runs on seven hits while walking five and striking out six.

“Girls battled and played a great game tonight,” said head coach Lisa Ziebell. “Kaetlin pitched her best game tonight. It took us a while to get going, but we got things going with the short game again.”

The Wolverines move to 3-3 on the season and will be back in action Tuesday afternoon when they host Randolph.