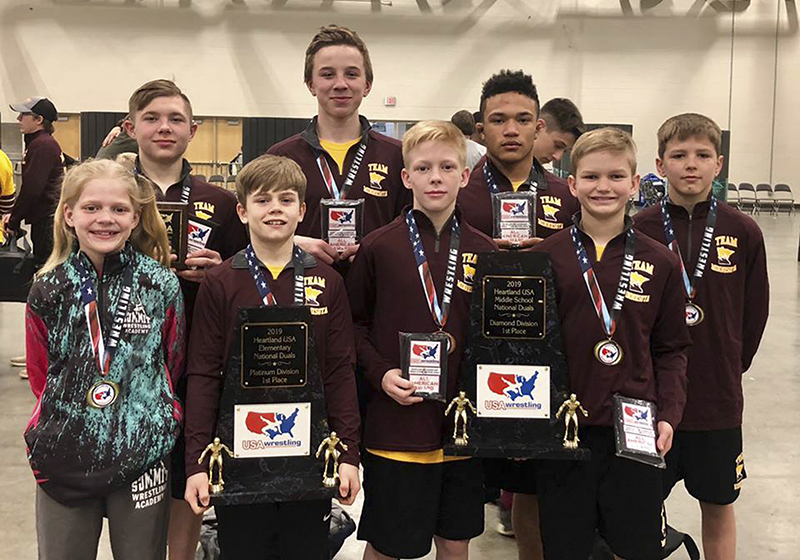 The phone finally rings — it’s that call you have been anxiously waiting for. You answer, “Hello” and the man on the other end asks, “Hey, can Cole make 126 pounds for Heartland National Duals in April?” Your heart sinks as you know your child has grown since the high school state tournament and without daily wrestling practice making 126 pounds will be a lot of work. You respond with, “132 pounds would be preferred, but I’ll let you talk to Cole.” Cole steps away with the phone and you overhear him say, “Coach, I’ll do whatever is best for the team.” He returns and hands you the phone. The man on the other end says, “That was easy. Now I need to know if Derrick can make 140. Can you get me his mom’s number please?”

This is the typical process when it comes to putting an all-star wrestling team together to represent Minnesota.

The Minnesota USA Wrestling organization selects youth wrestlers (K-8) to compete as a team at the Heartland USA National Duals in Council Bluffs, Iowa each April. Kids are noticed and selected for their specific age group because they participate and have success in high -level tournaments and many are part of larger clubs outside their school-program to get additional training.

The Albert Lea Area Wrestling program had a strong showing. They came in second behind Wayzata with the most wrestlers representing one specific school — Albert Lea had eight and Wayzata had nine.

“The wrestling season can be a long season, starting back in early November,” said Albert Lea wrestling head coach Paul Durbahn. “The accomplishments of these eight individuals really speaks to their commitment and work ethic. They sure have represented Albert Lea well, and I’m very proud of them.”

From Albert Lea, wrestling on the National Championship Minnesota girls’ team was fourth grader Maggie Olson. She went 6-4 for the weekend.

Sixth graders Brody Ignaszewski, Nick Korman and Triton Cox wrestled on the National Championship Minnesota Storm elementary team. Ignaszewski and Cox went undefeated, earning All-American honors, and Korman went 5-2. Cox was awarded Most Valuable Wrestler by his coaches. According to Ignaszewski, this is his third time being part of the Minnesota USA team, and the best part is being on the same team with the best kids in the state of Minnesota. In the three years on the team, Ignaszewski has only one loss.

Logan Davis, sixth grader, went 6-1, and his Minnesota Thunder team placed ninth in the elementary division. He was awarded Most Valuable Wrestler, and this was Davis’ third trip as well.

Eighth graders Cole Glazier and Derrick McMillian were both undefeated on the National Championship Minnesota Storm middle school team, both earning All-American honors. McMillian said the best part of making an all-star team is the new gear you get,

Mike Olson, seventh grader, went undefeated and earned All-American honors on the Minnesota Thunder middle school team that placed fifth. Olson has many years of experience at this tournament, as this is his fifth year competing on a Minnesota team at the Heartland National Duals. For Olson, the team dinner after weigh-ins where wrestlers and families get to bond is most memorable. According to Glazier, the experience is more than just wrestling; it’s hanging with the friends you make from other schools and getting to know other coaches — and by the way, he wrestled at 132 pounds, not 126. Next up is the Freestyle and Greco season, along with some baseball.

Ann Glazier is the mother of Albert Lea wrestlers Zach and Cole Glazier.