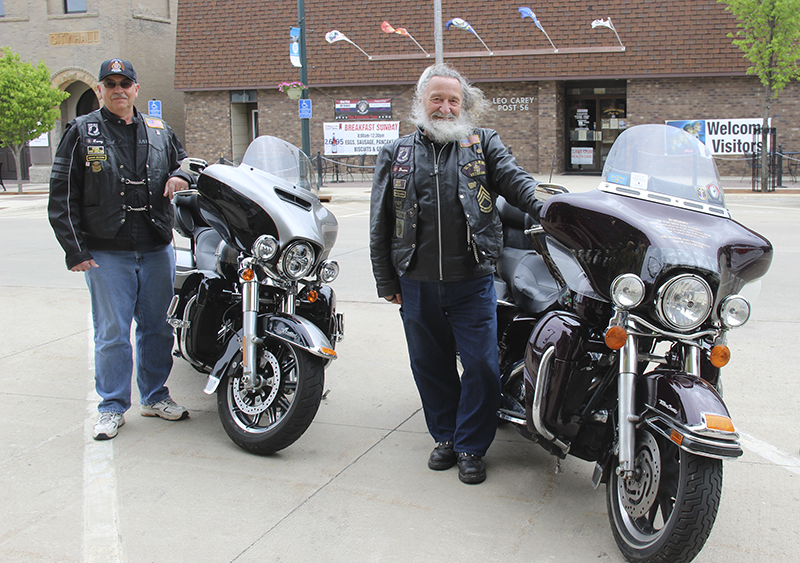 Albert Lea American Legion Riders Director Duane Thomas, right, and Assistant Director Larry Larson will lead the Albert Lea ceremonies Thursday and Friday as part of the Patriot Tour. The American flag will be escorted from Mason City to Albert Lea on Thursday and then will depart from Albert Lea Friday morning to Delano. Sarah Stultz/Albert Lea Tribune

The Patriot Tour to stop in Albert Lea this week

The 10th annual Patriot Tour, a nationwide 110-day journey with the American flag to support disabled veterans and their families, will arrive in Albert Lea Thursday afternoon before departing again Friday morning.

The public is invited to welcome riders and the flag on Thursday and attend a ceremony Friday morning before the motorcyclists begin the next stint of the ride.

Duane Thomas, director of the Albert Lea American Legion Riders, who is organizing the Albert Lea stop on the journey, said the flag will depart Mason City at 3 p.m. Thursday and will travel north on U.S. Highway 69 before arriving at Bomgaars in Albert Lea at about 4:30 p.m.

A dinner is planned for riders Thursday evening at the American Legion, and then a ceremony is slated for 9 a.m. Friday in the North Broadway parking lot before riders leave to travel to Crow River Harley-Davidson in Delano. The ceremony Friday will include remarks by Albert Lea Mayor Vern Rasmussen Jr., singing by Harmony Junction Chorus and a presentation by the American Legion and Veterans of Foreign Wars color guard.

Thomas said law enforcement and the Albert Lea Fire Department will participate, and the fire department will have the American flag hanging by a fire truck over the street.

The flag started on the journey Saturday, leaving from Beaver Dam, Wisconsin, and will travel 14,500 miles with motorcycle riders through all 48 continental states before arriving back in Beaver Dam Sept. 7.

Founded by Bill Sherer, Nation of Patriots founder and executive director, in 2009 after witnessing the hardships his friends endured after returning home from active duty, Nation of Patriots is a 501(c)3 organization that works on a national level to promote awareness of and financially support the physical, emotional and economic misfortune that disabled veterans and their families live with every day.

As an all-volunteer organization with administrative costs covered by corporate sponsors, Nation of Patriots ensures that 100% of funds raised go directly to the veterans it strives to help, Sherer said in a news release. The organization works with Veterans Affairs facilities and other veteran organizations to identify the recipients of its funds.

Nearly $1 million has been raised nationally through the effort since it began in 2009.

Thomas said if people have suggestions for veterans who can benefit, they should reach out to him with the information. Criteria includes that a veteran be a Purple Heart recipient and have at least one dependent.

“It’s such an honor to help veterans,” Thomas said.

As a Vietnam War veteran himself, he remembers how he and his fellow military members were treated when they came home from Vietnam.

He said he is proud to be a part of an effort that supports veterans.

Larson, who joined the Legion Riders under his father, who served in World War II, said it is important for him to be a part of the effort in honor of his father and three older brothers who served. He said he enjoys serving veterans in need.

He said people do not need to be a Legion Rider to go on the ride.

The Albert Lea American Legion Riders group began in 2016 and has 87 members.