A symphony of sounds 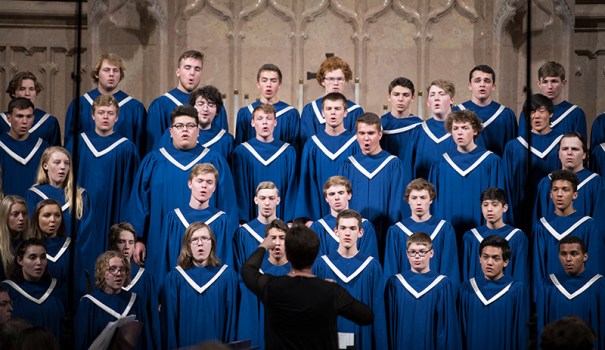 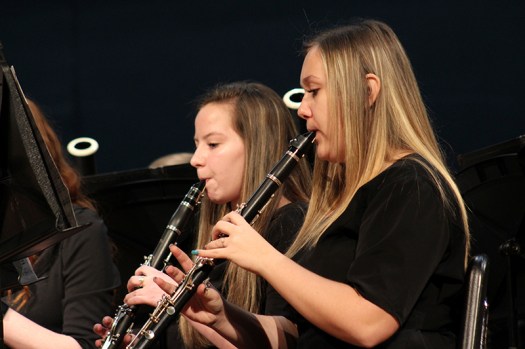 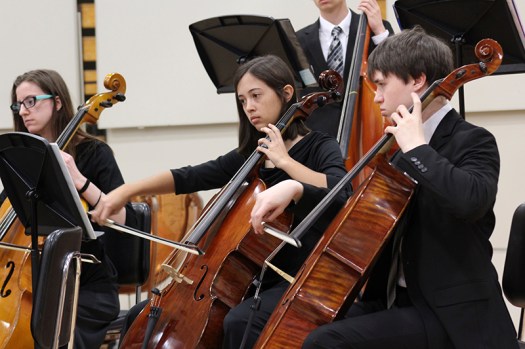 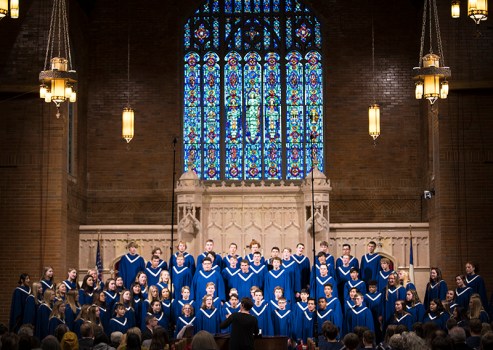 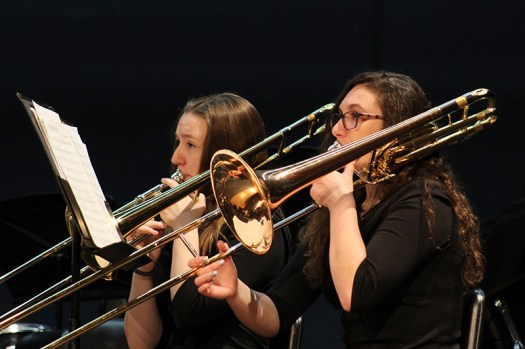 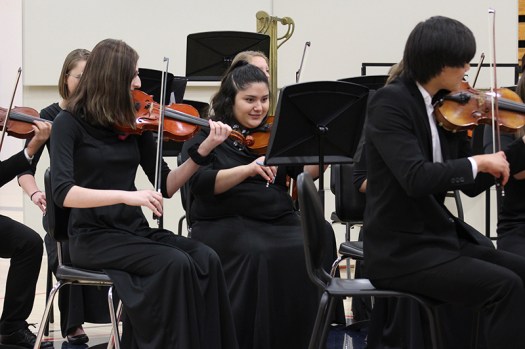 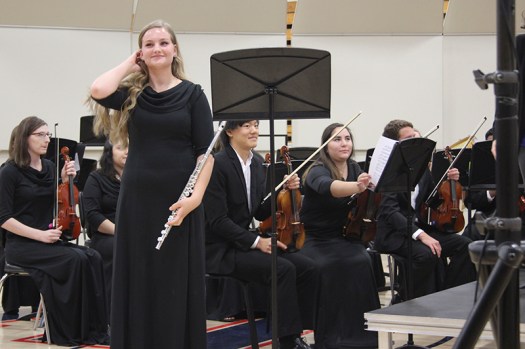 The Albert Lea High School band finished the first performance of the day with a bang — or, rather, a snap.

“Being the first ones for Big Nine, it’s always nerve-wracking, but I think we did pretty good,” senior Romario Rosas said.

Eleven other schools bused in band, symphony orchestra and choir students from around southern Minnesota as all Big Nine schools participated in the annual Big Nine Music Festival hosted by Albert Lea Friday.

Albert Lea High School was the first of the bands to perform, working through “The Squealer” and a softer, slower “Dusk” before finishing with robust percussion and several cracks of a slapstick for “Alligator Alley.”

During the day, Albert Lea’s symphony orchestra and choir also performed. Select students from all three groups participated in the Grand Finale concert, which featured students from each school all combined for an evening performance.

The daytime portion of the festival was open to the public. Grandparents Sue and Kelly Callahan took advantage of that to watch their grandson, a 10th grader who performs in both the symphony orchestra and the band.

“He’s worked very hard to get to what he’s doing — all of the kids have,” Sue Callahan said.

Kelly Callahan said attending the Big Nine Music Festival was a big deal for them, as Albert Lea hosts once every 12 years. Attending locally is not an opportunity they have all the time, Sue Callahan said.

She sees the festival as one that allows students to learn from each other to make themselves better musicians.

“We have some really talented kids in southern Minnesota,” Kelly Callahan said.

Tenth grader Aaron Farris, who performed in the band as well as the select concert in the evening, said the Big Nine Music Festival allows students to have genuine new experiences.

“It’s really good to listen to other bands and just take their example,” he said.

Hannah Steele, an 11th grader who performed with the band and choir, said the festival is also a  good chance to meet new people from other schools.

“We just have a great time,” she said.

The orchestra played later in the morning, and the choir performed in the afternoon at First Lutheran Church.

“I thought the soloist was outstanding,” Baldwin said.

He said he considers the clinician’s role as one of encouragement, which he said is vital.

“What they’re doing is so important and so difficult,” Baldwin said.

Baldwin also complimented Albert Lea’s orchestra director Rebekah Crissinger, a former student of his: He said he has nothing but praise for teachers like her who work to cultivate ensembles.

“It takes years to grow an orchestra,” Baldwin said. “It’s like growing trees.”

Senior symphony orchestra member Makenzie Kenyon said she thought the performance went well for the space — the gym can be a hard atmosphere to adapt to, she said — and that the pieces were more challenging than usual with more soloists and small-group sections within the symphony orchestra, senior Anna Bordewick said.

“It’s fun pieces to present to a clinician to get feedback,” Kenyon said.

Band clinician and University of Jamestown assistant professor and director of instrumental music Laura Lynch said it was fun to see what the bands performing were able to achieve.

Albert Lea’s band stood out in terms of its sense of group time, Lynch said — they had no conflict within the group in regards to time-keeping. She said the group also had great tone colors and energy.

For parent Anna Banks, music — specifically choir — has been a way for her son to feel like he is part of a group. They moved to town last year, and the choir has given him a feeling of unity, she said. She attended the choir’s performance Friday afternoon. She said she tries to make it to every one of his performances.

“My son asked me to be here, just to support him,” she said.

The choir started its set not on the risers, but by filling the aisles in the middle and sides of First Lutheran Church and surrounding choir clinician and St. Olaf College associate professor of music Therees Hibbard. As they sang their first piece, call-and-response “Swilo Yini Makhanana” between soloist and choir, the group danced onto the bleachers, turning and raising their fists. The sound rotated with them, moving out to the audience in waves as the students turned toward and away from the crowd.

“They’re an amazingly beautiful choir,” Hibbard said. “So feelingful. The repertoire they sang was amazing.”

Hibbard was complimentary toward all choirs performing at the Big Nine, and said she was amazed at the level of musicianship at the high school level.

“It gives me hope for the future and certainly for music in our schools,” Hibbard said.

Senior Katie Funk said feedback from Hibbard was positive, and that the group had energy and provided variety. Hibbard encouraged them to consider emphasis on repeated words to add intensity, and to loosen up and move more during their last piece, “Our Music” by Simon Wawer, senior choir and symphony orchestra member Maddie Schei said.

According to Lynch, festivals like the Big Nine show how important music is in schools.

“Everything that they learn in music, they’re going to take and use in any job that they have,” Lynch said.