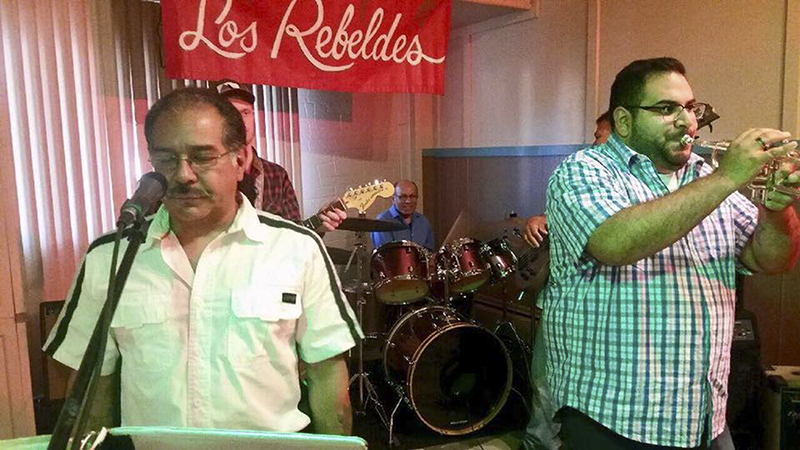 Current Los Rebeldes members are carrying on a tradition of a family-centered Tex-Mex band, complete with horns and accordions. The group plays covers of popular country and folk songs, Tejano-style. - Provided

According to Luke Cardona, the music his family band will play at 7:30 p.m. May 25 comes from south of the border — the Minnesota border.

“There’s not a lot of bands like ours left in Minnesota and the Midwest that plays the type of music that we do,” Cardona said. “It’s very niche.”

Los Rebeldes is a band filled with family members started by Cardona’s grandfather and great-uncle. The group played through the late ’70s, but Cardona said the group officially formed in the mid-90s.

Together, their specialty is Tex-Mex, or Tejano music, which Cardona described as a combination of country, folk, rock ‘n’ roll and polka blended together. The stylistic origins list is long.

“That’s why it’s so well liked by a lot of people,” Cardona said.

A lot of what the group intends to play was popularized by recognizable names: Hank Williams, Johnny Cash and Freddy Fender. But the style sets itself apart, Cardona said.

Most of the songs are led by accordion or trumpet.

Traditional Mexican music stylings of ranchera, cubia and bolero are layered over American stylings of country, folk and rock. This, Cardona said, is Tex-Mex music.

Joining the band is Dennis Charnecki of Denny and the DC Drifters, whose interest in Tejano music was sparked by members of the Talamantes family, with whom Charnecki said he played music every Sunday for over a year in the ’70s.

Tex-Mex was an interest for Charnecki because it was high tempo and fun, he said. 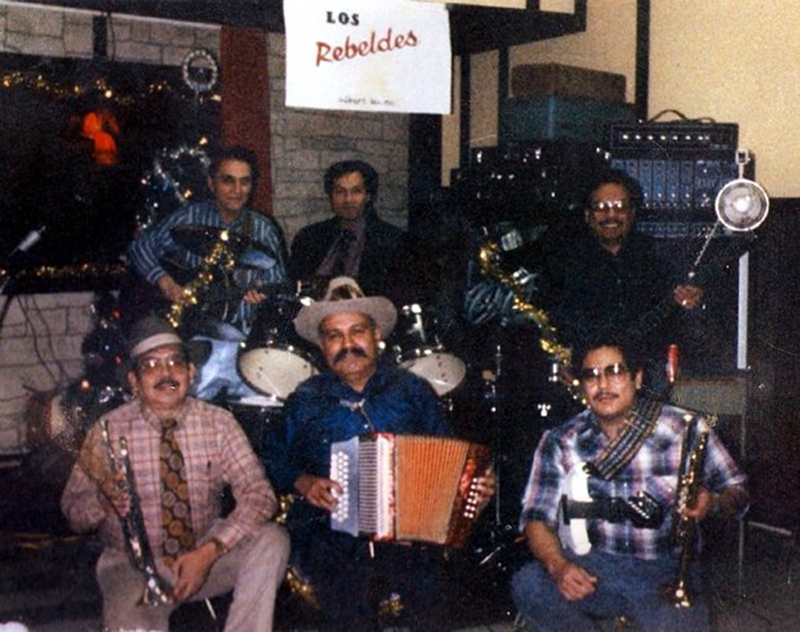 The original Los Rebeldes played heavily in the 1980s and ’90s. -Provided

Charnecki will play with the group May 25, as will longtime Los Rebeldes player Curtis Gilbert, who also plays for the DC Drifters.

“I think if people just want to, I mean, even if they don’t understand Spanish music, I think they’ll love the style,” Charnecki said.

Some songs are sung in both Spanish and English.

Charnecki said he also appreciates that Los Rebeldes does this music as a family.

“That’s always, to me, that’s something special,” Charnecki said.

Cardona started with Los Rebeldes at age 13 in 2002, he said. He plays the accordion and trumpet. His father plays trumpet and guitar. Gilbert was a band member before Cardona, beginning as a guitar player in the mid-’90s. During that time — the ’80s and ’90s — Cardona said the band played almost every weekend at dance halls, weddings and other celebrations.

Now, he said, they are more like a novelty act. The group still plays a few times a year at quinceaneras, weddings and festivals, but according to Cardona, the demographic that demanded Tex-Mex in the ’80s and ’90s is not as present anymore.

“There’s only a small market out there … and so we like to do it for those people,” Cardona said.

When they play together, it is a celebration of the music and a representation of their culture, Cardona said. While members of Los Rebeldes play with other groups, Tex-Mex is their foundation.

But they also continue to play Tex-Mex together because they enjoy it, Cardona said. While the group membership has changed a lot over four decades, he said it has stayed very true to its roots.

“It’s fun, and we do it as a family, and so that’s always a good time,” Cardona said. “We’ve never done this to become rich and famous. We really enjoy picking up the instruments and playing and being together.”