Gordon Dean Miller, beloved husband, father and friend, passed away Thursday, April 11, 2019, at Prairie Senior Cottages in New Richland. He was the husband of Bethel Luverne (Born) Miller. They would have celebrated 57 years of marriage Sunday. 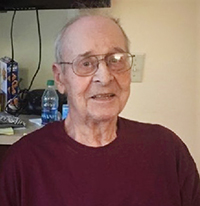 Gordon was born Nov. 16 1932, to Clara Lena (Trasamar) and Harry William Miller in Buffalo Center, Iowa. His family moved around southern Minnesota and northern Iowa before moving to Manchester.

After graduating high school, Gordon enlisted in the U.S. Navy. He often told the story of receiving draft paperwork from the Army while he was in boot camp. He served aboard the USS Oriskany (CV-34) during the Korean War.

He married Bethel and they settled in Albert Lea, where he took a job at Wilson & Co.

When he wasn’t working, he could be found tending his garden or taking care of the lawn. He loved eating the vegetables from his garden or giving away the vegetables he couldn’t eat. It was always fruits and vegetables in the garden, as he was sure that flowers were a wasted effort. Vacations were spent hunting and fishing. He preferred walleye, but wouldn’t turn down a nice northern pike or crappie. He also enjoyed hunting pheasant and deer.

Services to be announced.