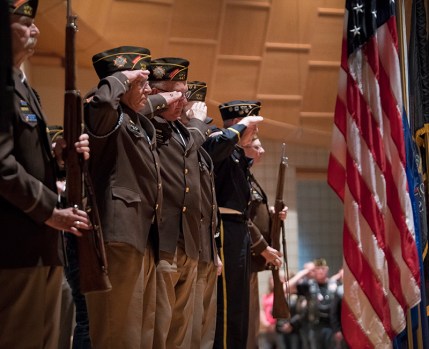 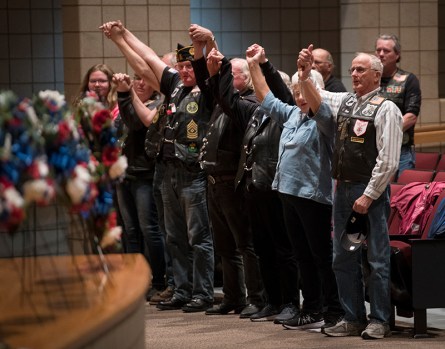 Those in attendance raise their joined hands during the Careyaires' singing of "God Bless America" during Monday's service. - Colleen Harrison/Albert Lea Tribune 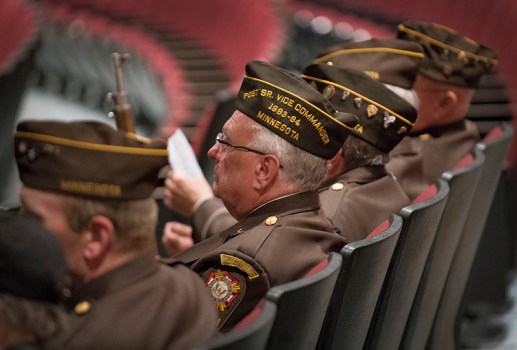 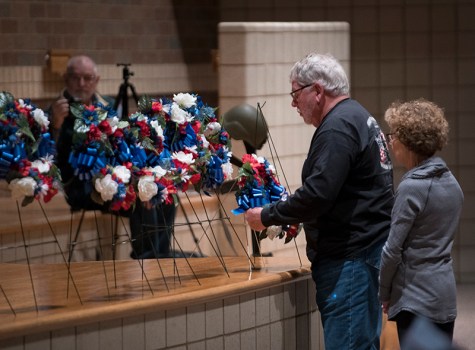 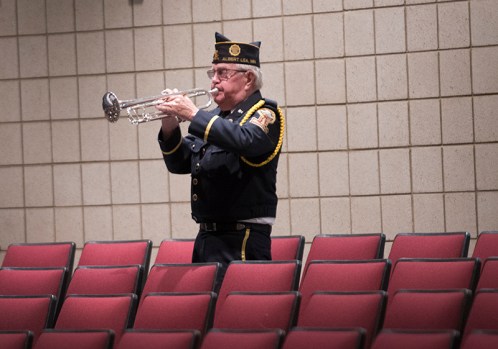 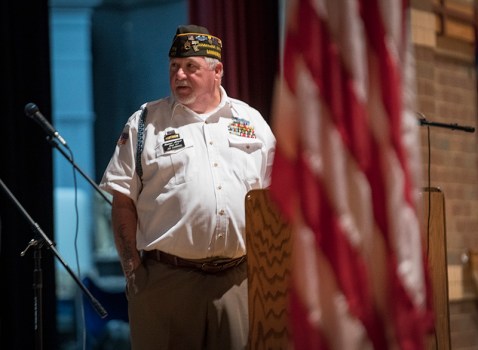 While the weather tried to throw a wrench into the scheduled events, fallen heroes were still remembered in Albert Lea for Memorial Day.

A ceremony that was originally slated to take place in Graceland Cemetery was moved to Albert Lea High School on Monday morning. According to Veterans of Foreign Wars Post 447 Cmdr. and Monday’s master of ceremonies Jim Cummins, it was just the second time in 10 years where the annual ceremony had to be moved indoors.

Most of the planned parts of the ceremony translated well indoors, with only the volley fire having to be left out due to being inside.

Albert Lea Community Band and the Careyaires were on hand to provide music for the service — with the band performing the opening service prelude as well as the national anthem, while the Careyaires sang “America the Beautiful,” “Military Medley,” where veterans are asked to stand when their respective military branch is represented, and “God Bless America.” American Legion Post 56 bugler Ed Nelson was on hand to play taps.

The ceremony’s featured speaker was Army veteran John Behrens. The annual placing of the wreaths took place, with representatives from the American Legion, VFW, Women Veterans of Freeborn County, Disabled American Veterans, Minnesota National Guard and American Veterans Post 47 on hand to place wreaths. Don and Deb Goodnature placed a wreath in honor of Gold Star families. The Goodnatures’ son, Corey, was a pilot for the 160th Special Operations Aviation Regiment of the U.S. Army who was killed in action in Afghanistan on June 28, 2005. He was one of 16 killed when his company’s MH-47 Chinook helicopter was shot down while attempting to rescue missing U.S. Navy SEALs. Al Brooks, whose father was a prisoner of war, placed a wreath in honor of POW and MIA memorials.

The event was opened and closed with prayers given by VFW Chaplain Larry Weigel.