Joanne E. (Overgaard) Schrader of Albert Lea died peacefully Monday, April 29, 2019, at St. Mary’s Hospital in Rochester. Friends may visit with family and share memories from 2 to 4 p.m. Sunday at Bonnerup Funeral Service in Albert Lea. There will be a private interment at Lakewood Cemetery in Albert Lea. 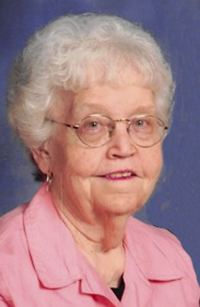 Joanne was born April 30, 1936, in Albert Lea, the daughter of Henry and Jennie (Olson) Overgaard.

She went to her heavenly home one day before her 83rd birthday.

Joanne graduated from Albert Lea High School and completed training at the Minnesota School of Business.

Joanne met her soulmate, Theodore “Ted” Schrader, at the local root beer stand and they were married Nov. 16, 1957.

For many years Joanne worked in the office at Wilson & Co./Farmstead, and later at Rink Systems and Agilis.

She was a member of First Lutheran Church.

She found great joy in supporting, encouraging and cheering on granddaughter Tiffany and her friends in all of their activities. She was known as “Grandma Jo” to many.

Joanne will be greatly missed by her daughter, Pat Schrader, of Albert Lea; her son, Perry Schrader (Jim Hill), of Winona; granddaughter, Tiffany (Seth) Buchanan, of Glenville; a precious great-granddaughter to arrive in June; sisters-in-law and brothers-in-law Marlene Overgaard of Albert Lea, Betty and Dick Hanson of Little Rock Arkansas, and Donna and Phil Olson of Loudon, Tennessee; and several nieces and nephews.

“We have many special memories of Joanne, but those of us lucky enough to have received her special birthday call and song, were truly blessed,” her family said.