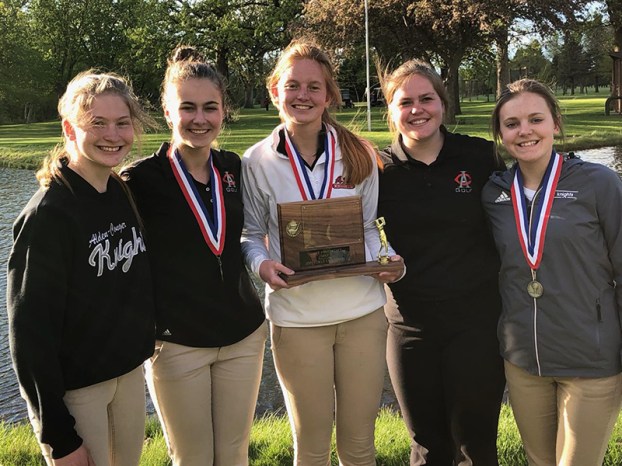 The girls’ team strung together some of their best golf of the season to win the tournament, while the boys’ team finished fourth out of seven.

Also scoring for the girls’ Knights team was eighth grader Emma Kleinschrodt, who finished the day with a score of 138. Junior Mikenna Erickson also golfed at the meet, carding a round of 150.

On the boys’ side, Alden-Conger got three sub-100 rounds, earning it a fourth-place finish with a team score of 390.

Leading the way for the Knights was senior Ryan Hansen with a 90, landing him in fourth place individually and earning him an All-Conference bid. Junior Jack Redman and senior Erick Theusch were close behind, garnering All-Conference honorable mention with scores of 96 and 99, respectively.

Rounding out the scoring for Alden-Conger was senior Austin Attig with a score of 105. Eighth grader Ryker Erickson and seventh grader Parker Hintz just missed out on scoring for the team with rounds of 109 and 118, respectively.

Warriors know this is something special; uncertainty ahead