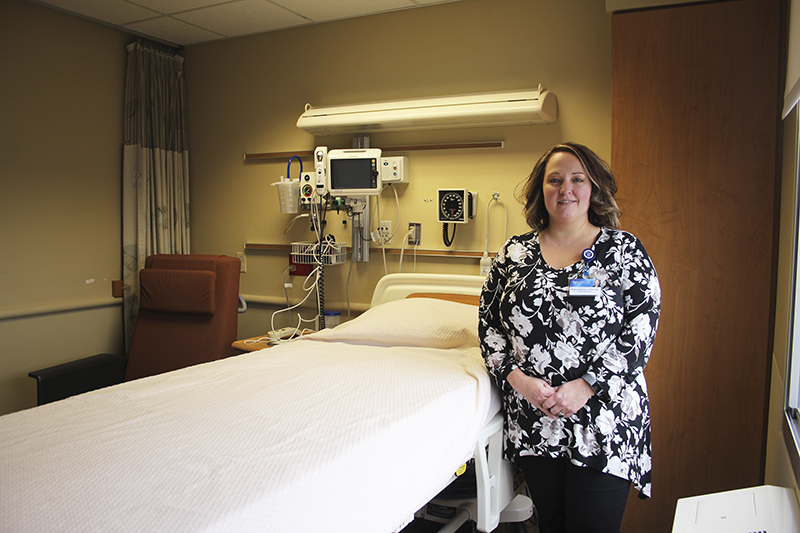 A nurse practitioner and nurse manager sees patient care and leadership as two aspects that help her enjoy her job.

Melissa Bertelson, a nurse practitioner in the same-day clinic and nurse manager in the medical surgical unit at Mayo Clinic Health System in Albert Lea and Austin, started nursing school directly out of high school.

“I always had an interest in helping other people,” she said.

She attended Riverland  Community College in Austin for its two-year program, then began at Mayo in Albert Lea in the same unit she works in now: medical surgical. She began with input work, but took on some supervision as she gained experience, Bertelson said.

“It got me thinking more about nursing as a leadership role — it got me interested in that aspect of patient care and helping patients work through issues that they were having — not only, like, as an illness but also concerns they had about their care and how things were going,” she said.

After moving away for a few years and managing a clinic in Redwood Falls, Bertelson moved back to Albert Lea in 2009. When she returned to the medical surgical unit, she came back to some familiar faces.

“A lot of the nursing staff that had kind of fostered me and gave me my base and my beginning were still here, which was so nice to come back to,” Bertelson said. “… They were still my solid base of people.”

Bertelson said she took the nurse manager role in the medical surgical unit in 2012.

“Then I was pushed to extend my education because of leadership,” she said.

She went on to receive her Bachelor of Science at Winona State University, and later earned her family nurse practitioner master’s degree a year ago.

“Leadership was a good role for me because I liked helping staff build and coach them into building their leadership pieces of their nursing roles,” she said.

As a nurse practitioner at the same-day clinic, Bertelson got back the patient care aspect she misses working as a nurse manager.

“I think that’s why I chose to go back and take that on,” she said of her role as a nurse practitioner — because she enjoys helping patients.

But when Bertelson moves to the same-day clinic full-time after the medical surgical unit transitions to Austin, she worries she will miss her leadership role the most, she said.

Bertelson said when she works as a nurse manager, she has the opportunity to coach staff and see people she manages excel at their jobs. It is her favorite thing about being a nurse manager: seeing other people enjoy their own jobs. As a leader, she said she tries to foster the leadership of others, and create buy-in and ownership in those she leads.