Margaret A. Peterson, 94, a resident of Lincoln, Nebraska, was promoted from this earthly body and entered her eternal home Thursday, May 9, 2019. 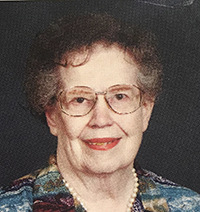 Margaret was born March 12, 1925, in Albert Lea to Alfred and Rebecca Peterson. She spent her early life on the farm — working the soil and caring for flocks, herds and plants. Later in life she cared for her parents. After leaving the farm she cared for the well-being of patients in Naeve Hospital in Albert Lea. In the closing years of her life, she in turn was cared for by family and then the professionals of Sumner Place of Lincoln. She is now resting in the arms of Jesus for ultimate caring.

Margaret was preceded in death by parents Alfred and Rebecca Peterson and brothers Marshall and Robert.

Survivors include nephews Robert of Firth, Nebraska, and Wayne of Irving, Texas; and niece, Sharon, of Norfolk, Nebraska; along with their spouses, children and grandchildren.

Until the end, Margaret was always concerned for others. In conversation she would always ask how the families of others were. And she would later comment, “It is so nice to hear that you are all doing well.”

Her family is now delighted that Margaret is now the one “doing well,” and she is safe in the arms of Jesus.

Margaret desired memorials to be given to her church, Bridge Community Church, 2016 Bridge Ave. in Albert Lea.