Memorial Services for Marlene S. Skophammer will be at 11 a.m. May 11 at Trinity Lutheran Church in Albert Lea. The Rev. Eileen Woyen will officiate. Interment will be in Hillcrest Cemetery. Friends may visit with family one hour before services at the church. Bonnerup Funeral Service is assisting the family. 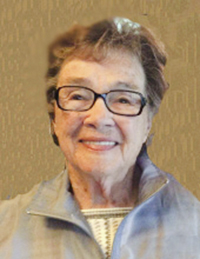 Marlene Susan Skophammer died Dec. 10, 2018, at Tekamah Care and Rehabilitation Center in Tekamah, Nebraska. She was 85.

Marlene grew up in West Point, Stockton, California, Fremont, Omaha and Tekamah. The family moved to Tekamah after her freshman year. Marlene graduated from Tekamah High School in 1950 and got her first job at Mutual of Omaha in Omaha. This work carried through with her most of her life as she worked for several insurance companies as a certified insurance underwriter.

On Aug. 14, 1954, Marlene was married to Paul Michael Skophammer in Orange County, California, and they were married 64 wonderful years. Mike and Marlene lived their early married lives in Santa Clarita, California, and raised five active sons. Upon retirement in 1993, Mike and Marlene moved to Albert Lea and bought a farm. In 2001 they moved to Tekamah where they enjoyed Husker football, worldwide travel and multiple sporting events. Marlene always thought her greatest accomplishment in life was raising five wonderful sons.