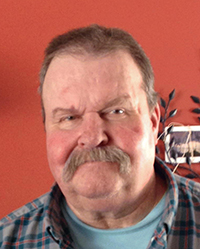 Mitchell Harold Weitzel was born Oct. 11, 1952, to Harold and Noreen (Dahl) Weitzel in Albert Lea. He attended Albert Lea High School, but his hard work ethic brought him to the workforce early, helping his dad with his roofing business.

He married Rhonda Bolinger on May 19, 1973, at Zion Lutheran Church in Albert Lea. They had two children together. They moved their family to Zumbrota in 1989, when Mic started his own roofing business, Weitzel Roofing. He retired in 2009, but continued to help his brothers, who took over their dad’s business. Mic was very proud of his work and it showed. He would continuously point out his roofing jobs to his family.

Mic enjoyed working on old cars, attending and competing in car shows, going to the cabin, watching “Gunsmoke” and Steven Seagal movies, feeding the birds and spending time with family.

His family and friends will miss his feisty, ornery personality and his huge heart; he was always willing to help out his friends and family.

Mic was preceded in death by an infant brother, Danny Weitzel; his parents Harold and Noreen Weitzel; and brother-in-law, Terry Trish.

Condolences may be left for the family online at www.mahnfamilyfuneralhome.com.

Memorial services for Dale Turner will be at 11 a.m. Friday at United Methodist Church in Albert Lea. The Rev.... read more