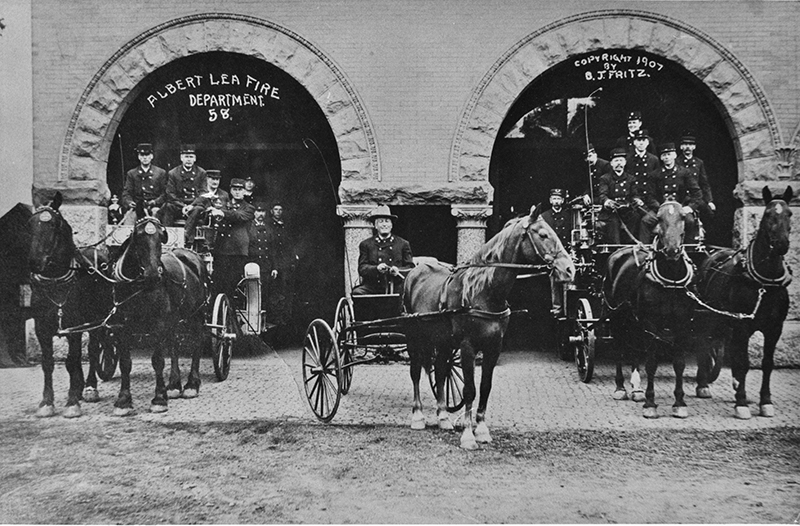 The Albert Lea Fire Department was once housed in the same building as City Hall. From about 1903 until the fire department was completely motorized in 1917, the building housed stables for a team of horses that pulled fire fighting equipment. - Photo courtesy Freeborn County Historical Museum

NEW RICHLAND — The owner of a New Richland business is leaving his mark on downtown Albert Lea.

Steve Schulz, 52, of Albert Lea is one of a handful of contractors working to restore the old city hall building at 200 N. Broadway ahead of the Governor’s Fishing Opener this weekend. Through his business, Solid Wood Products, Schulz was contacted by general contractor Bruce Hagen to work on two sets of arched doors on the front of the building.

The doors once opened into stables, which housed the horses utilized before the Albert Lea Fire Department became fully motorized in 1917. Schulz was hired to help restore the look of the historic building while making sure the new doors still matched the existing brickwork. To do this, Schulz utilized a computerized numerically controlled router.

“That lets me draw something like this on the computer very accurately,” he said.

Using computer software and photos of the building, he was able to quickly and easily design the doors and the machine then cut the pieces for him. 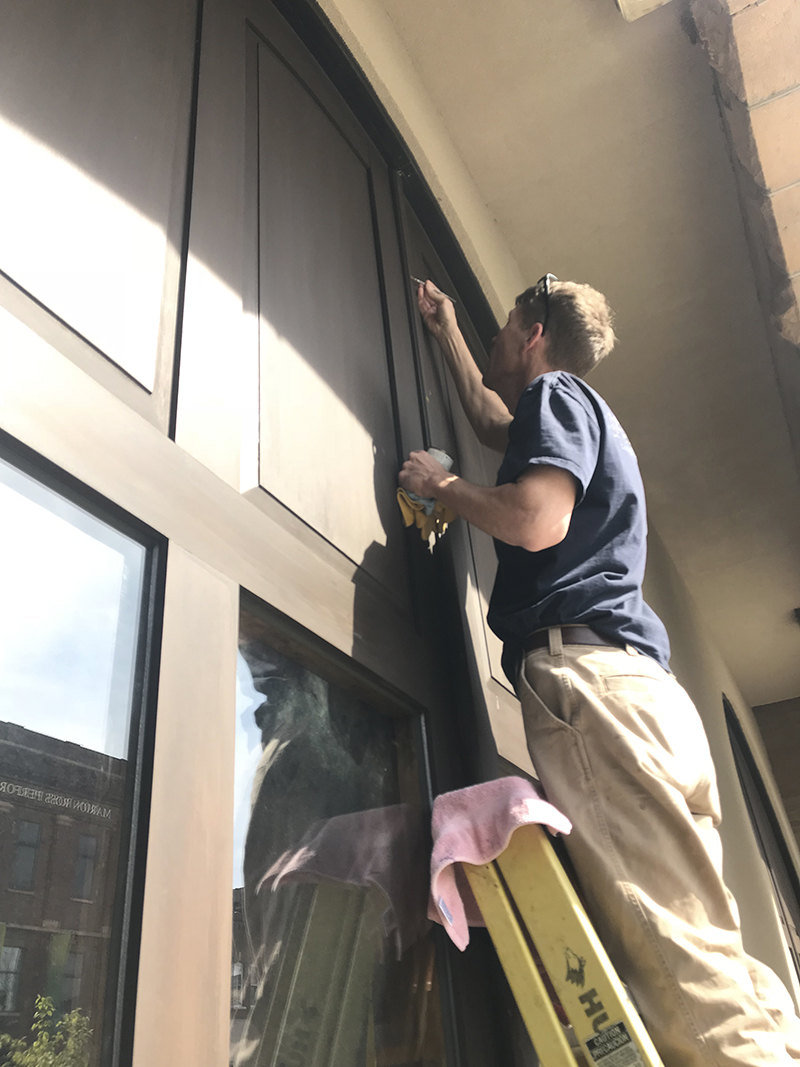 Steve Schulz puts final touches on a set of doors which have been recently installed at the old city hall building. The building, which is at 200 N. Broadway, now serves as office space for ISC Financial Advisors. – Kelly Wassenberg/Albert Lea Tribune

He said this particular project was in the planning phase last year, but he didn’t start fabricating the doors until late winter. The doors were installed a couple weeks ago and the enclosure that was protecting the front of the building was removed Tuesday, when he also took the time to make a few finishing touches on the doors.

The computerized numerically controlled router can be utilized in residential projects as well. While those who provide custom cabinetry services can help accommodate a customer’s need for deeper or taller cabinets, the specialized router allows Schulz to work around architectural features and take design elements from existing parts of a customer’s home or business and continue the pattern in new construction.

Schulz has been working in the custom cabinetry business full time for three years, but he has been building things ever since he was a child, although he has graduated from the days of making cutting boards, toolboxes and book ends.

“At the end of the day, I can see something I’ve created, whereas before I just had a pile of boards and a can of stain,” he said of what drew him back into the wood shop. “It’s fun to engage in that creative process.”