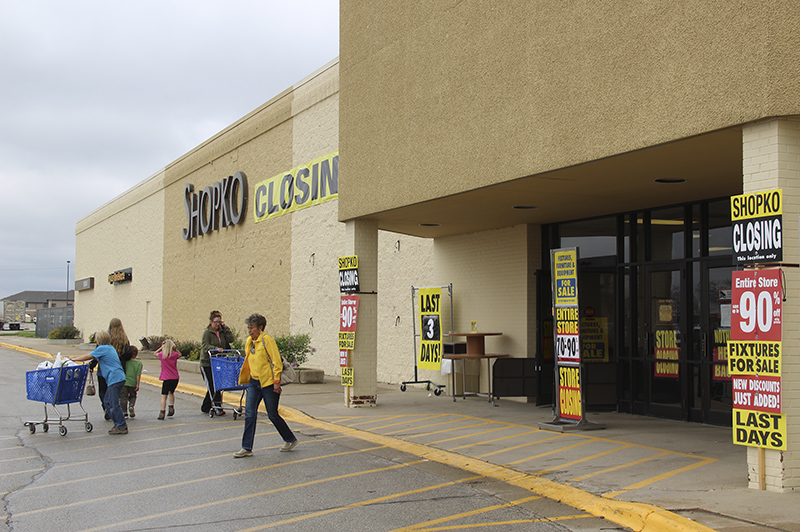 Customers walk in and out of Albert Lea's Shopko Friday afternoon during what is one of the final three days for the company in the city. The store is expected to close at 6 p.m. Sunday. Sarah Stultz/Albert Lea Tribune

After almost 34 years in operation, Albert Lea’s Shopko is slated to close its doors on Sunday to customers.

The store is expected to close at 6 p.m. or sooner, depending on when the merchandise is gone, said store Manager Karla Tukua.

She thanked the customers of the Albert Lea area for the many years they shopped at the store.

“We’ve appreciated the loyal customers who have supported us,” she said.

Tukua, who worked at the Albert Lea Shopko in two stints, started in 1992 as merchandise manager. She said she was promoted and transferred multiple times until being promoted to store manager of the La Crosse South Shopko in 1998.

She stayed with Shopko until 2005 and then took a 10-year break working with other retailers.

She and her husband moved back to Albert Lea, and once she heard there was an opening for store manager, she applied and got the position in 2015. 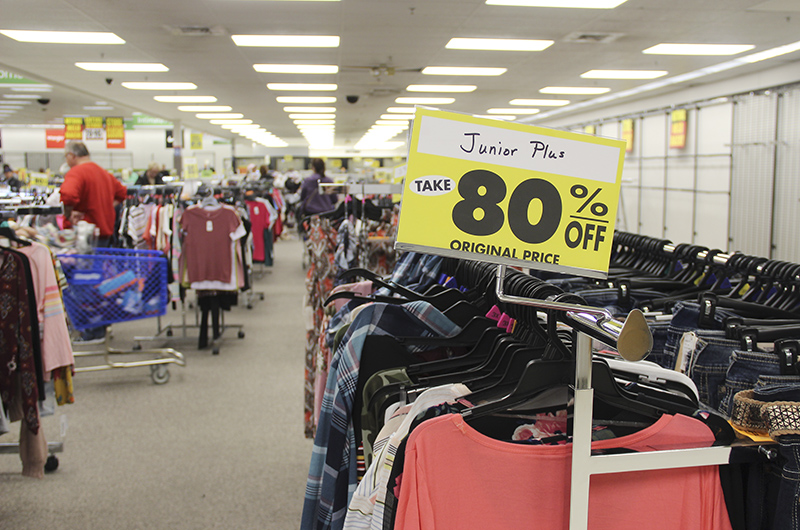 All of the merchandise has been marked off and is expected to be further marked down throughout the weekend before the store closes. Sarah Stultz/Albert Lea Tribune

“I felt like I had come home — it was such a surreal experience coming back to the store where my retail career began all those years ago,” Tukua said. “Many of the same teammates were still here, teammates that had opened this location back in 1985. I am going to miss this store and miss the team that worked here, and more importantly I will miss our faithful customers that came in every week.”

She said there were some people who walked the mall who she saw almost every day, and they became like family to her and her team.

“We have loved being a part of the Albert Lea community, and we thank our customers for their patronage for the past 34 years,” she said.

She thanked the Shopko employees who welcomed her back to the store and for their dedication.

“We have always taken pride in presenting a great store to the public and for the great service that we tried to provide on a daily basis.”

Jean VanGuilder was one of the employees who helped open Shopko in 1985 and who has worked there ever since. Though she retired in September, she said she has continued working there part time.

“It’s really going to be sad,” she said of what it will be like for her when the store closes on Sunday. “I don’t think it has hit me yet.”

She and Karen VanReese, another employee who has worked there for about 30 years, said they will miss seeing their regular customers. The two women have worked in a variety of departments over the years.

VanReese said she feels sorry for the community with the loss of both Shopko and Herberger’s, and she hopes a new company will fill the space soon.

Tukua said most of the store’s employees already have new jobs lined up at other locations. She said she will be the store manager of the new Marshall’s in Austin, and VanReese and VanGuilder said they will officially retire.

Though the store has been marked down for several weeks, Tukua said the store would continue to be marked down further each day throughout the weekend until it is closed on Sunday.

The closure comes as Monarch Alternative Capital LP on Thursday announced it has acquired Shopko Optical, with plans to relocate nearly 80 of its locations housed inside Shopko stores to freestanding locations.

According to the Green Bay Press Gazette, the acquisition was for $8.5 million. Monarch Alternative Capital, a New York-based private investment firm, was the sole bidder for the bankrupt retailer’s optical business in mid-April, the newspaper stated.

Shopko CEO Russ Steinhorst said the optical business will continue to operate under the name Shopko Optical, the Gazette stated.

“As we move forward with our plans to operate 80 freestanding optical locations, we continue to be dedicated to our patients, doctors, opticians and the communities we serve,” Steinhorst said in a press release. “We encourage anyone with questions to please get in touch with our team. We appreciate the continued patronage of our patients and their understanding during what we hope to be a continued smooth transition.”

Andrew Herenstein, co-founder and managing principal of Monarch, said in the release Monarch is excited to welcome Shopko Optical into its portfolio.

“Monarch has a long, successful history of investing in great companies undergoing transitions and working alongside their leadership teams to build strong, vibrant businesses of the future,” he said.

Jim Eisen, former president of Visionworks, is working as an operating partner with Monarch alongside the Shopko Optical team.

“I’m grateful for the opportunity to join the Shopko Optical team,” Eisen said. “We are committed to continuing to provide quality patient care and outstanding service that our affiliated doctors of optometry and opticians have provided for over 40 years. It is an exciting time to be part of the Shopko Optical family.”