Taking sports to the next level 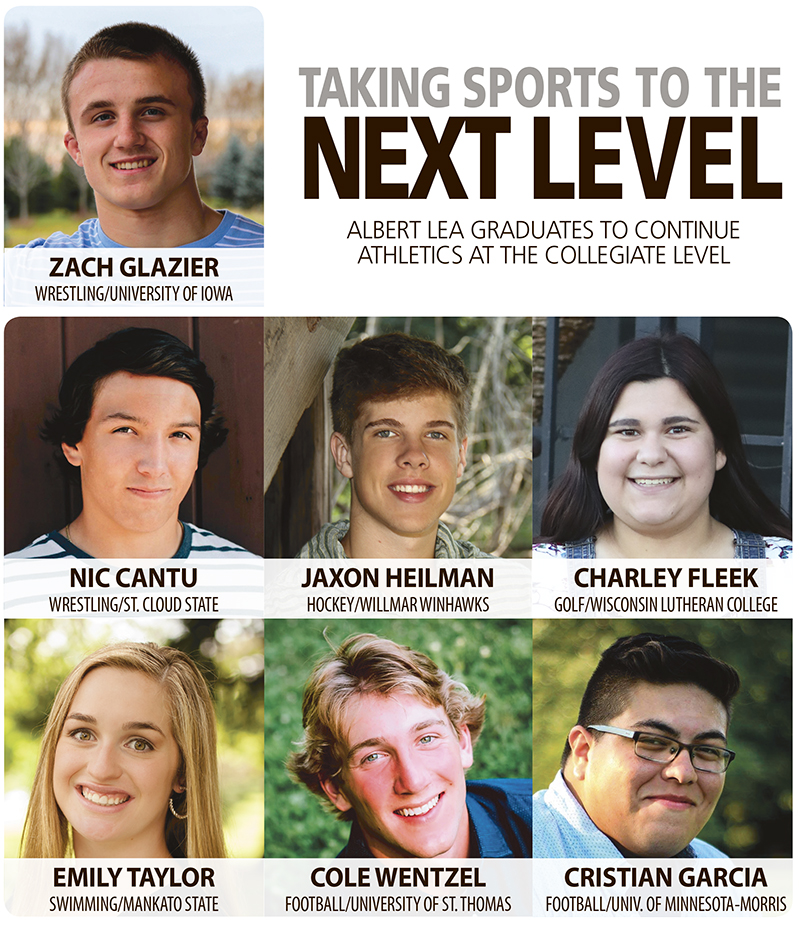 Albert Lea graduates to continue athletics at the collegiate level

Here’s a deeper look into the seven Tigers who will continue their athletic journeys:

Zach Glazier finished his days of high school as one of the most decorated wrestlers to ever go through Albert Lea’s program. On top of two state titles — one at 170 pounds his junior year and one at 182 pounds his senior year — Glazier has been a dominant force on the mat since his seventh-grade season. He finished his senior year with zero losses on his way to compiling the most wins in school history.

Glazier will attend the University of Iowa to wrestle. His planned major is business.

“Continuing my career into college means a lot to me, especially because I get the opportunity to wrestle at the school I’ve always dreamed of,” Glazier said. “It’s very self-satisfying to know that all the hard work and discipline I’ve put in has enabled me to chase my dreams of being a national champ for the Hawkeyes. Go Hawks!”

After qualifying for state multiple years, Cantu unfortunately missed out on a trip to state his junior year due to coming down with the flu the day of sections. The missed opportunity led to a tremendous amount of preparation and work over the offseason with the goal of winning a state title. Despite a stellar season, Cantu fell just one match short of a state title, finishing with a third-place medal while dropping just one match in the tournament to the eventual state champion.

Cantu will continue his wrestling career at St. Cloud State.

A key part of the Albert Lea boys’ hockey season, Jaxon Heilman was one of the top goaltenders in the state of Minnesota his senior season.

“Jaxon is a tremendous hockey player and fantastic 4.0+ student,” said head boys’ hockey coach Jason Fornwald. “He was in the top 10 in the state for goaltender statistics his senior year. He will be missed in our high school program, but we all wish him great success in the next steps of his hockey career.”

Heilman will not play college hockey, but instead will join the Willmar WarHawks. The WarHawks are a junior hockey team and a member of the North American Tier III Hockey League.

Charley Fleek has continued to develop her golf game over the years for the Tigers. Especially in her senior year, Fleek has stepped up her game and has become one of Albert Lea’s top scorers in every match.

With her senior season still in full swing, Fleek is hopeful she will take the next step and reach the state tournament as an individual. As one of the only two seniors on the Albert Lea team in 2019, Fleek’s leadership as well as her play on the course has made her a pivotal piece in the Tigers’ lineup.

Fleek will attend Wisconsin Lutheran College to play golf. Her planned major is biochemistry with a focus on pharmacy.

“It means a lot to even be contacted by a college to play for them,” Fleek said. “In the past I never thought that I would want to play in college, but looking forward now, I don’t think I can see my college career without it.”

Emily Taylor has remained a bright spot on a rebuilding Albert Lea girls’ swim and dive team. Throughout her high school career Taylor has qualified for the state meet numerous times, culminating in an 11th-place finish in the 100-yard breaststroke.

“Emily was a dedicated swimmer who worked hard everyday to improve and meet her goals,” said head girls’ swim and dive coach David Voller. “Emily was always coachable and had a drive to improve. She would seek out coaching as well and ask questions on how to get better. Emily’s work ethic served as an example to the younger swimmers as a team.”

Taylor will attend Mankato State to swim. Her planned major is elementary education.

“Ever since I was in fourth grade when I started swimming, I knew I wanted to compete on a college team,” Taylor said. “Mankato State University has such a great team all-around, and I love the coach’s philosophy on the sport of swimming. I know it will be an amazing next four years as a Maverick, and it truly is a dream come true.”

Cole Wentzel was a utility player on the football field throughout his days as a Tiger. From filling in for an injured quarterback in his junior year, to playing running back and quarterback his senior year while always being a force on the defensive side of the ball, Wentzel has been a driving force in Albert Lea’s resurgence in football.

Wentzel will attend the University of St. Thomas to play football in the fall. He plans to major in either entrepreneurship or finance.

“I’ve wanted to play college football my whole life and it’s crazy that my dream has turned into reality,” Wentzel said. “I’m excited for a new challenge and to reach my full potential. It’ll be fun to see where I can take it.”

Like Wentzel, Cristian Garcia was a major roleplayer in the revitalization of the Albert Lea football program. Garcia got it done in the trenches for the Tigers, leading the way for an offensive line that caused problems for opposing defenses.

Despite his senior season being cut short due to injury, Garcia came back to achieve his dream of continuing his football career.

Garcia will attend the University of Minnesota-Morris to play football. His planned major is sports management.

“Being able to continue my education and athletic career means a lot to my family and I,” Garcia said. “I would like to thank them, alongside friends and coaches for supporting me. I can’t wait to get to (University of Minnesota Morris) and get started! Burn The Boats!”