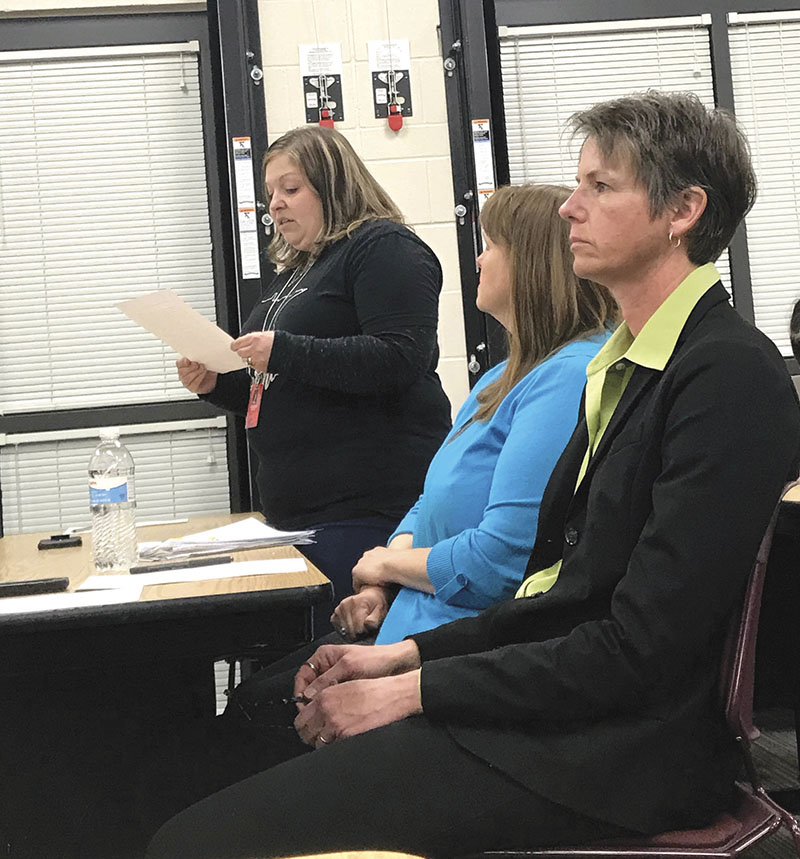 Stephanie Soost, left, and Kara Christianson, right, were two of the over 40 United South Central teachers in attendance at the May 21 school board meeting to address budget cuts. - Katie Mullaly/Faribault County Register

Both Kara Christianson and Stephanie Soost, current United South Central educators, spoke at length during the public input portion of the meeting on their feelings with regard to the board’s decision to not only cut two staff members, but to move next year’s fourth grade from three sections to two sections.

“We are here as a voice for our students at USC. Your decision to put third grade into three sections last August made a successful impact on USC. Educators and parents have noticed positive changes socially, behaviorally and academically,” Soost said. “We encourage you to reach out to any of these people who have had contact with these students. They can share the positive impacts small class sizes have had on these learners.

“We’d like to express our concern about putting these particular students back into two sections. These students come to us with a wide variety of challenges. Evidence shows that these students have improved. It does not mean the behaviors have disappeared, it means the intervention of putting these students into three sections has been successful.”

Soost said fewer students in each section allows United South Central teachers to meet the behavioral needs of their students immediately and allows for fewer distractions and less personal conflict between students, saying the decrease in those concerns benefits every learner.

At the forefront of the United South Central educators’ conversation was the reading curriculum the district just invested in. The new reading material focuses strongly on small group instruction, which means the teacher leads a small group of four to six students, while the others work independently. Soost said this would be a challenge to execute without interruption with the students in larger class sizes.

“USC has prided itself on small class sizes, allowing us to better differentiate instruction, which has contributed to our successful MCA scores,” Soost said. “We would not be coming to you if we did not believe this is what these students need. Please consider the Education Association’s recommendation and provide these students the same opportunity for success that they had this year.”

Christianson then took to the  podium to address her concerns to the board, as well.

“I’ve been a life science educator for 27 years, 20 of those at USC. I’ve never addressed the board during public input before, but I am bringing you a problem that needs to be corrected,” Christianson said. “Through my teaching career here at USC, it has always befuddled me as to why the elementary school does not have an art teacher and why a schedule can not be figured out to add that into a school day. Art encourages creativity and design, inspiring innovations in all aspects of our lives; architecture and design, engineering of all types, medical advances, graphic design and how art has influenced history.”

Christianson continued on to say she has spoken to superintendents past and current about adding an art curriculum in the elementary school and has always gotten the same answer, “we cannot schedule it.”

“Obviously there is a way. It has been done by other schools and was a part of my own education,” she said to the board. “Let me point out that larger class sizes will not help to improve student learning or MCA scores as it will limit individualized help to the students from the teacher.”

“These issues have been taken to Principal Schlaak and Superintendent Fleming. I have been told by Superintendent Fleming that there is no money in the budget to keep our staff and that cuts have to be made,” Christianson said. “Upon leaving that meeting, I walked past the media center and wondered where the money came from for the glass walls. I started asking teachers if anyone had any input into that project or even knew what was going on. The response back was a definite no. It was my understanding at that time there would be discussions with educators about the project and that it might be worked on this summer. There were no discussions with teachers, and coming back after winter break, there were the glass walls. Again, I want you to be aware that educators have had little, if any, input into the implementation of this project.”

Christianson said she was very frustrated that money had been spent putting up glass walls and now teachers are being told there is no money to keep current teachers.

“I am no financial guru, but it would seem to me that pet projects, such as the glass walls, would be pushed back until the money is known to be there,” she said. “Balancing the budget should not be at the expense of teaching positions or the refusal to expand a teacher’s contract. We should be trying to hire and retain highly qualified teachers in our district, encouraging them to expand their programs, all the while keeping class sizes low. This is what our community wants. We must consider what is in the best interest of our students. USC is not in the business of saving money but is here to best educate our students.”

After her address to the board, the room filled with applause from teachers and educators in support of Christianson’s address. The board chose not to address either of the concerns from Soost or Christianson, but continued on with its agenda, which included:

• Scheduling a date for a special school board meeting to discuss and approve the proposed drainage outlet agreement between the United South Central School District, Bryon and Jacelyn Voigt, Patrick and Barbara Daly, and the city of Wells. The meeting was set for 5:30 p.m. May 28.

• Approving a request to call for milk and bread bids for the 2019-20 school year, consider approval for changes to the 2019-20 high school and elementary student handbooks, authorizing United South Central’s 2019-20 Minnesota State High School League membership, approving the sale of surplus property and approval of a donation of benches to the Wells Rifle & Pistol Club.

When it came to the approval of the termination of two employment contracts, Employee A and Employee B were approved to be terminated by the board with no further discussion. Neither of the terminated teachers were named during the meeting or in the board’s agenda.

Before Chairman Dale Stevermer could make a motion to adjourn the meeting, both board members Brad Heggen and Diana Brooks addressed the concerns of the teachers.

Heggen shared he would be more diligent in looking at these issues both from a board member’s perspective, and a parent’s perspective after hearing from his daughter that one of her classes had been cut. Brooks said she had been addressing these exact concerns all along, but felt her opinion was not heard.

“I had my concerns about the media center project, and I don’t think we came up with the right solution. I don’t want to see us shooting ourselves in the foot and I don’t think our students should suffer. If we can figure out all of our other concerns, I think we can figure these staffing issues out, too. I think we should keep the discussion alive and create a meeting to keep this conversation going.”

There was no second to Brooks’ suggestion.

Stevermer then made a motion to adjourn the meeting, with no other input on the concerns of the United South Central staff. The meeting adjourned 42 minutes after its start.