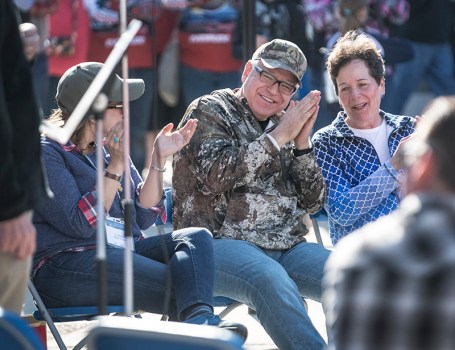 Downtown Albert Lea was blocked off to traffic for a community picnic Friday night as part of the Governor's Fishing Opener. - Colleen Harrison/Albert Lea Tribune 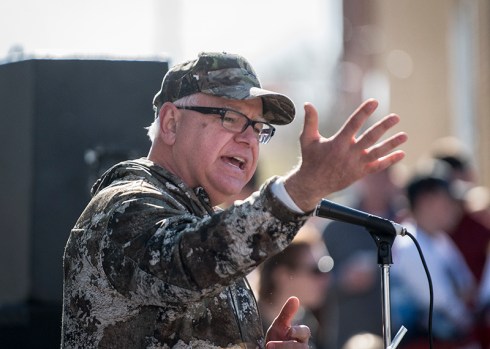 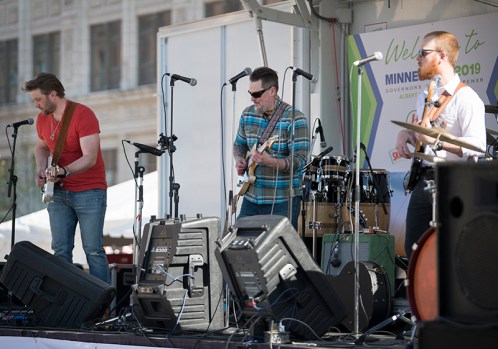 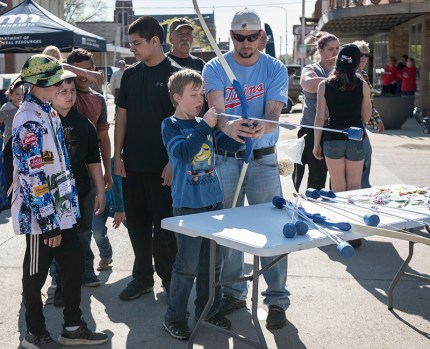 Archery setups and other activities were available for people to try during the community picnic Friday. - Colleen Harrison/Albert Lea Tribune

While the Minnesota governor and lieutenant governor did not arrive at Friday night’s community picnic in their signature buffalo plaid, those planning the fishing opener made sure they did not leave Albert Lea without it.

The picnic served as a community celebration of the Governor’s Fishing Opener, the 72nd annual but the first to be held in Albert Lea — and the first with Gov. Tim Walz and Lt. Gov. Peggy Flanagan at the helm.

Explore Minnesota Tourism Director John Edman said the state hosts the event because it is National Travel and Tourism Week.

“Fishing is a really big important part of it,” Edman said.

“I think there was some hesitation on people whether the fishing culture would be as strong as it is up north,” he said. “I think Albert Lea put that to rest. It certainly is.”

DNR Commissioner Sarah Strommen said Albert Lea is an example of the diversity of angling opportunities in Minnesota, from streams to rivers and boats to shore, with a variety of species.

“All of that exists in Albert Lea,” Strommen said.

In addition to appreciating the blessing of the state’s natural resources, Walz said the Governor’s Fishing Opener is about family and community.

“There’s an economic engine behind this that makes outdoor activities and tourism one of our largest industries, but there’s a cultural piece that binds us together,” he said.

In addition to a free picnic set up in a blocked-off downtown Broadway Avenue, the event had games and educational stands for children and families. On the opposite end of Broadway from Walz, who mingled with the crowd ahead of the presentation, two boys whacked a lever in an attempt to send plush fish into their respective frying pans.

Albert Lea residents Dan and Diane Dittrich and their grandson, Anden Brandt, attended the picnic to see what was happening downtown. The trio also took a look at The Albert Lea Art Center, the Big Island Rendezvous demonstration and popped into Marion Ross Performing Arts Center, where a John Denver tribute would take place later in the evening.

Dan Dittrich said he plans to walk along the lake tomorrow and keep tabs on the governor’s progress fishing.

“I thought it was wonderful,” Diane Dittrich said. “… I was surprised he would come to a small town. The lake is beautiful, but the town is small.”

Hayward residents Kristi Hantelman and children Paisley and Ferran Hantelman and Ian Wildeman also attended the picnic. Wildeman said he will not join those out on a lake this weekend, but that he is getting into fishing again.

According to Walz, engaging young people is an important part of the conversation around fishing license sales, which hit a mid-season low last year after the Fourth of July period. As the state becomes more urbanized, Walz said, people can also become more separated from where the lakes are.

He cited the Albert Lea Anglers, a high school sport fishing team, as a way to involve young people in fishing.

“It’s absolutely part of habitat restoration and making sure that we’re making good environmental decisions, but it gets these kids involved in an activity outside,” Walz said.

Minnesota is second only to Alaska in the percentage of population that fishes.

“We have to turn that up and keep going,” Walz said.

The governor also used the picnic as a chance to dole out plaques of gratitude and appreciation to Mayor Vern Rasmussen Jr. and the city of Albert Lea, Freeborn County, the Shell Rock River Watershed District and the Convention and Visitors Bureau.

Convention and Visitors Bureau Director Susie Petersen, in turn, presented a gift to the governor, lieutenant governor and DNR commissioner: a tote bag containing a buffalo plaid button-up in black and red.

“Really, you’ve rolled out the buffalo plaid carpet for us,” Flanagan said.

Petersen thanked the over 600 volunteers she said pitched in to help for the weekend.

“It’s because of you that makes this community the way it is — and how special and blessed we are,” she said.

Strommen reminded fishers of the lack of aquatic invasive species in Albert Lea area lakes, and asked those fishing over the weekend to free their boats of weeds, clean and dry their boats, pull the plug, drain the livewell and dispose of bait properly.

Flanagan encouraged Twitter users to vote on whom of the pair would catch the most fish, citing a historical advantage based on past lieutenant governor performances during the fishing opener.

“It’s all you, brother,” Flanagan said, calling on her fishing host, Mike Petersen. “Let’s do this thing.”