Work at Halverson soon to be underway 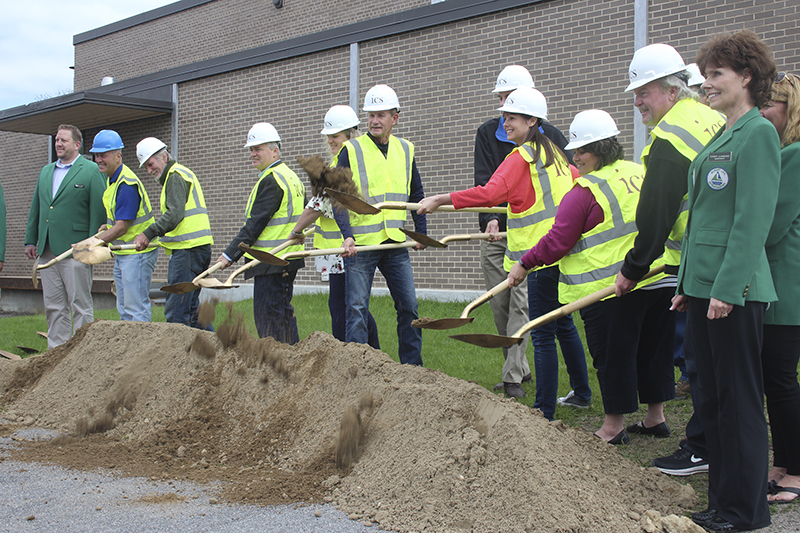 While the superintendent and some school board members put on hard hats and vests Thursday for a groundbreaking ceremony, the real work begins Tuesday.

With work at Hammer Complex and the high school already well underway — and the HVAC installation in the Albert Lea High School already completed — construction at Halverson Elementary School joins in as the final dimension of the facilities upgrade voters approved in a special election last May.

Work on Halverson was awarded to JD Driver Ltd, a Rose Creek-based contracting company with a $2.86 million bid.

According to Dean Bendtsen, project manager with JD Driver, the final completion date for both phases of the project is Nov. 27. Construction is set to begin Tuesday.

The first phase completion date is Aug. 16, at which time two of the five restroom remodels added to the project and a new  special education area will be ready for use.

The gymnasium, which is expanding from half- to full-size, and the secured office entrance will be completed in November.

A special education area at the front of the school will be moved deeper into the belly of the building, while the office near the center of the school will be moved to the front. According to ICS Consulting project manager Dan Thompson, who is overseeing the facilities project as a whole, a portion of the building’s front will expand further west to accommodate that office space, while the building will also expand north into what is now the parking lot to make possible the gym addition. The parking lot will also be expanded north into a grassy area west of the playground.

The gym walls were precast and are in storage, Bendtsen said, and the roof structure is also ready.

The gym walls are scheduled to be put up toward the end of June.

School board chairman Ken Petersen said he is excited to see gym space added to Halverson, which he said would be helpful for the whole district in accommodating programs, and to see additional safety measures taken with the front of the building.

“We’re a little bit behind because of the rain, but I mean, maybe a week,” he said. “It’s not bad. We’re on pretty good pace.”

Anderson said the fieldhouse exterior walls should go up next week, though the building as a whole will not be ready until November.

The turf football field should be completed by the end of June, and the grandstand and bleacher footings are in place. The district is shooting for the first game to be held Sept. 3, Anderson said.

“That’s what the athletic department wanted all along,” Anderson said.

The chain link was a budget-driven decision, and without too many change orders in the first phase of the project, Anderson said, “We feel comfortable now that we can spend that money.”

The project timelines overlap each other as The Joseph Co., awarded the bid for Hammer Complex construction excluding the turf football field, continues work toward overall completion.

At the high school, underground plumbing is done and the concrete floor is poured. Constructing interior walls is the next step, Anderson said.