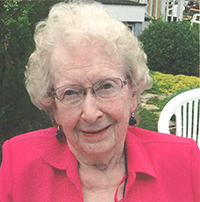 A funeral service will be at 11 a.m. Monday at United Lutheran Church in Walters. The Rev. Don Rose will officiate. Visitation will be from 2 to 5 p.m. Sunday at Bruss-Heitner Funeral Home in Wells and will continue one hour prior to the service at the church Monday. Visit www.brussheitner.com to leave an online condolence. Bruss-Heitner Funeral Home in Wells is in charge of arrangements.

Betty was born March 16, 1929, in Walters, the daughter of Vern and Clara (Enser) Sauer. Betty went to high school and continued her education by going through accounting training and post office management training.

Betty was united in marriage to Ellwood Peterson in 1947 in Walters. Together they had five children. Ellwood died in 1955. On July 23, 1966, she married Francis Kalis at St. Casimir Catholic Church in Wells.

Betty worked in the accounts receivable department for Interstate Power and was a postmaster in Walters and Bricelyn for over 25 years. She enjoyed making quilts, baking pies, making birthday cakes for Freeborn School and road trips in the car.