Memorial services for Dale Orland Mowers of Albert Lea will be at 2 p.m. Saturday at the Bonnerup Funeral Service chapel in Albert Lea. The Rev. Richard Hegal will officiate. Visitation will be one hour prior to the service at the funeral home. Private family interment will be at a later date in the Sunset Rest Cemetery in Northwood. Military honors will be accorded by Albert Lea area veterans groups. 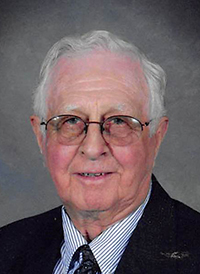 Dale was born Jan. 14, 1926, in Northwood, the son of Lloyd and Anna Mowers. He attended public school in Iowa. In 1948 he was united in marriage to Geraldine Stephens and together they had five children.

Dale was a World War II veteran serving in the Asiatic Pacific Theatre. Following the war he returned to Iowa and went to railroad school in Minneapolis. He worked for the railroad for over 38 years and part time for 20 years as the city clerk in Ellendale. Dale was a member of the Elks Club, American Legion Post 56 and Eagles Club. Some of Dale’s favorite past times were watching the Minnesota Twins and playing cribbage.

He was preceded in death by his parents; wife, Geraldine, in 2002; son, James Mowers; granddaughter, Tammi Jo Lestrud; brother, Earl; and two sisters, Evelyn and Ruth.

Memorials are preferred to Mayo Hospice in Austin, Quilts of Valor in Blooming Prairie, Leo Carey American Legion Post 56 of Albert Lea or to the donor’s choice.