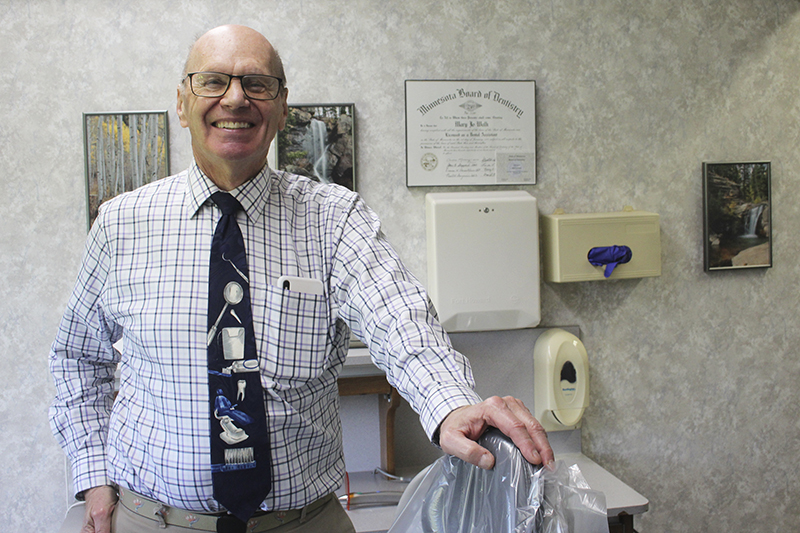 Over 30 photos taken by Dr. George Lundstrom decorate the office walls in his dentistry practice. He said he takes the photos for himself and shares them with his patients because they seem to enjoy them. Most of the photographs are taken while Lundstrom is on vacation and feature locations on his hikes in Colorado. Sarah Kocher/Albert Lea Tribune

When he is out on the trails, George Lundstrom can spot a serious photographer. It’s not him.

“A photographer? No,” Lundstrom said. “I’m a dentist.”

He is a dentist. But when he passes professional photographers on the trail — photographers with packs full of lenses who may stake out in one spot for the right light — he has a camera, too.

He keeps it in a one-shoulder bag he can swing forward from his back to his front to access his camera without taking his whole pack off. He brings one lens with him, and a tripod fastened to the outside of the pack with bright orange holders. He does so to limit the weight he brings on his 10- to 15-mile hikes.

Lundstrom said he began taking photos when he started hiking in Colorado. He likes the state because his trips there are so different from dentistry. In his job, his focus is on a small, dark space. He likes dentistry, but more of the same does not a vacation make.

“Colorado, especially when you get above the treeline, you get the whole horizon to horizon,” he said.

And where dentistry is largely inactive, hiking in Colorado is decidedly more so.

But the two worlds bleed into each other in his dental office at 209 N. 9th Ave., where Lundstrom has over 30 of his photos on display throughout patient spaces, in his own office and in the lobby area. More photos scroll across an iPad screen stationed on the receptionist’s desk. A photo of a gravestone marker at Normandy is paired with a white ribbon announcing its third-place finish in a photo contest at a state dental meeting.

The spaces flows something like a gallery, with groupings placed along the walls as patients travel through the hallway space and into their respective hygienist’s station.

“I take the pictures for me, you know, and the reason I display them around here is because some patients seem to like them,” Lundstrom said. “Sometimes I’ll walk by and somebody will be standing at the counter just watching the pictures scroll by. Sometimes they’ll ask about them.”

Hanging the photos up around the office may also personalize the dentist for his patients.

Lundstrom calls himself an opportunist photographer.

“My purpose is to hike, not to take pictures,” he said.

Still, when he returns to hike some of the same places he has before, he said he starts looking for different angles to shoot from.

Many of his photos are taken while on vacation, though he also takes photos at his home, which overlooks Fountain Lake. He said he is drawn to photograph almost anything that looks interesting.

“There’s a lot of cool things to look at when you’re out there, and you just have to kind of keep an eye open,” Lundstrom said. “When I’m hiking along, my eye, my head is on a swivel. I’m always looking for something to stop and take a picture of.”

Lundstrom moved from film to a digital camera in 2007 after he thought the cameras would provide enough pixels to enhance the size for prints, he said, and has cultivated a technical knowledge of his camera.

“Technical things are kind of my thing,” Lundstrom said.

Dentistry tends to select for technical people. It was the artistry side of dental work that he had to work on, he said.

In this way, dentistry can be subtle: dentists need not only recognize what does not look right, but also be able to “create the right from the not right,” Lundstrom said. He keeps a book of denture work he has done with before and after shots of smiling patients showing off each piece of art lined up next to each other. Lundstrom made gold crowns for 20 years.

“The artistic side of dentistry is making teeth look like teeth,” he said.

For now, this is the art Lundstrom continues to pursue. This may change when he retires. Lundstrom said he might spend more time developing photography as a hobby, driving around the county and making note of spots that might make for a good morning shot.

His artist’s philosophy is simple: if it looks cool, he takes a photograph.

“I just kind of take what I like,” Lundstrom said. “Whether it’s artistic or not, I don’t know.”