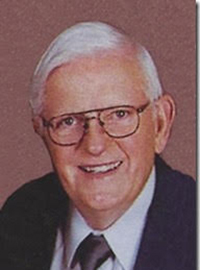 Eldon George Peterson was born Sept. 5, 1933, the son of Roy A. and Frouwiena “Winnie” (Hoeve) Peterson in Albert Lea. He graduated from Albert Lea High School and served in the United States Army from 1954 to 1956. Eldon was united in marriage to Roselyn Ferguson on May 27, 1956, in Ellendale. The couple lived in Babbit for eight and a half years and moved to Hayfield in 1965.

Eldon was employed at Rochester Technical College as a machine tool instructor and was a teacher in Denmark for two years on a student exchange program. Eldon wrote in his life history that every move in his life was inspired by the Lord and led him to each new adventure and career.

Eldon enjoyed metal and wood working, building model toys, camping, traveling and wintering in Arizona. The couple visited all 50 states and 16 countries. Eldon was a past president of the Hayfield Lions, member of the Hayfield American Legion and a member of First Presbyterian Church and served on the session and trustee committees. He received Teacher of the Year recognition and a special award from the Society of Manufacturing Engineers.

He was preceded in death by his grandparents, parents and sister, Dorothy Hemenway.

Visitation will be from 5 to 8 p.m. Sunday at Czaplewski Family Funeral Home, 501 Second St. NW in Hayfield, and one hour before the service at the church Monday.

The funeral service will be at 11 a.m. Monday at First Presbyterian Church at 109 E. Main St. in Hayfield. Inurnment will be in Fairview Cemetery with military honors by Hayfield American Legion Rothie Post 330.

In lieu of flowers, the family prefers memorials to Mayo Hospice.