How young is too young for a student to be suspended from school in Minnesota? 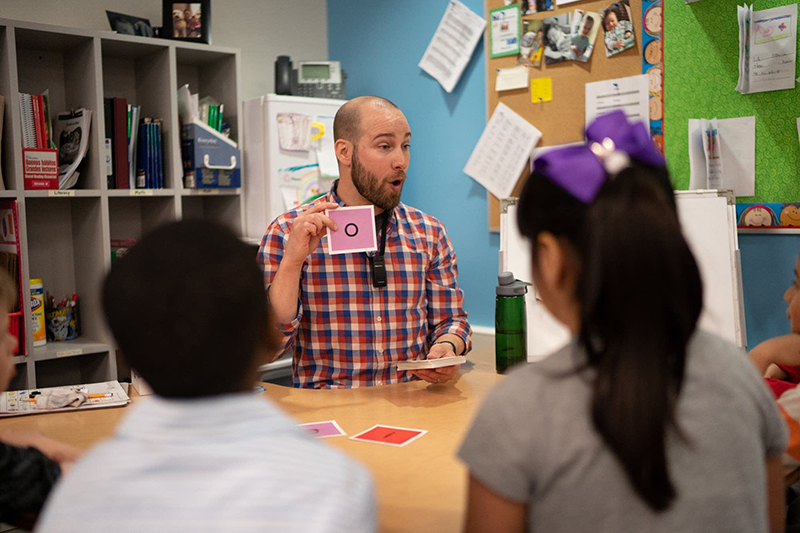 Kindergarten teacher Matt Proulx teaches pronunciation of Spanish vowels to his Spanish immersion students inside of his classroom at Wellstone Elementary School in St. Paul on April 24. - Evan Frost/MPR News

During story time recently at Wellstone Elementary School in St. Paul, teacher Matt Proulx paused to remind his kindergartners about his expectations for them.

“We’re going to stop right here for just one moment,” he told the children. “And check our bodies for a second. I want you to turn and talk to your partner … .”

Proulx has spent most of the school year teaching his students language and math concepts. But kindergarten isn’t just about phonics and numbers. It’s also about figuring out how to behave in school, how to make friends and how to learn in a classroom setting.

A policy proposal that failed to reach the governor’s desk this year would have affected the available tools that teachers and administrators can use to drive that lesson home. It would have banned suspensions and expulsions from preschool through second grade.

“I think a big part of our job as primary teachers is to teach students how to be successful at school,” he said. “And when we suspend … when we tell students to leave the classroom — it tells them that we can’t handle what they’re doing and we’re not willing to help them figure it out.”

Proulx has never had to suspend or expel a student from his classroom. But national data suggests that 3- and 4-year-olds are suspended at alarming rates. Minnesota doesn’t track preschool suspensions or publicly separate data on kindergarten suspensions. Nor does its public data distinguish suspensions from expulsions.

But exclusionary discipline of Minnesota’s youngest learners is a problem. Alternative discipline advocates like to point out that in some Minnesota school districts, more elementary students are removed from the classroom than middle or high school students.

What’s more, taking 3-, 4- and 5-year-olds out of their classes points at a larger problem with this sort of discipline. The Minnesota Department of Human Rights recently found that the majority of suspensions and expulsions in this state, for all grades, are made for subjective reasons that don’t involve physical harm to others, weapons or illegal drugs. In fact, nearly 40 percent of suspensions and expulsions are for “insubordination and disorderly conduct” — which could be anything from students saying a bad word to rolling their eyes.

Students of color are disproportionately affected by these sorts of discipline. The Department of Human Rights found they were twice as likely to be suspended or expelled as their white peers.

Bernadeia Johnson, assistant professor at Minnesota State University Mankato, was superintendent of the Minneapolis Public Schools from 2010 to 2015. When she saw the data on how many kids were being removed from their classrooms in her own district, she put a moratorium on suspensions from preschool through second grade for nonviolent behaviors.

This past legislative session, Minnesota lawmakers put forward a number of proposals aimed at regulating Minnesota’s various forms of exclusionary discipline. One proposal was a statewide ban on all pre-K dismissals.

That proposal made it into the House omnibus bill, but never advanced beyond conference committee, along with many other policy proposals that the DFL-controlled House and the Republican-controlled Senate disagreed on.

Bernadeia Johnson and kindergarten teacher Matt Proulx had supported the proposed ban. But Proulx, who knows exactly what it’s like to juggle the needs of one student who’s having a hard day with the needs of 20 other young students waiting to learn, had some concerns.

“If we have a law in place that says pre-K kids can’t be suspended, OK,” he said. “But then how are we as a district stepping up? Because those 4-year-olds are still going to come in with some challenging behaviors … I think it needs to look like more support in the form of people … whether that be more teachers, more trained teaching assistants … so that if there’s a student in the classroom being unsafe to themselves or unsafe to others, then that school has an option.”

The suspensions ban didn’t make it to Gov. Tim Walz’s desk this time around. But advocacy groups concerned with this issue aren’t giving up. They say they want to introduce more comprehensive legislation on regulating dismissals next session.

They also want to improve data collection on student discipline, and they want more training and support for teachers. For now, though, those are among the policy proposals that will have to wait for possible action later this year.