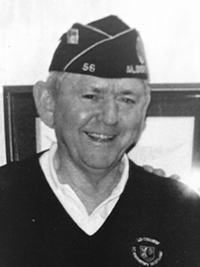 Loren joined the Navy in 1950 and was a veteran of the Korean War, proudly serving aboard the USS Valley Forge and the USS Boxer.

Loren spent his entire career with IBM, working in Minnesota, Colorado, Arizona, Rhode Island and California. After retiring from IBM, Loren and Lee moved to Albert Lea in 1993, where Loren was an active member and also worked for American Legion Post 56.

In 1997, they moved to Sun City, where he enjoyed being a member of the West Valley Amateur Radio Club, the Sun City Computer Club and the men’s golf league of Lakes East Golf Course.

He is survived by his loving wife of 62 years, Lee Peterson; his daughters Karen Martinson (Bob) of Albuquerque and Kristine Smith of Scottsdale, Arizona; his four granddaughters, Jennifer Anderson (Tom) of Bismarck, North Dakota, Lauren Martinson (Randy) of Santa Fe, New Mexico, Lesley Caldwell (Kurtis) of Arlington, Virginia, and Skylar Smith of Scottsdale, Arizona; and great-granddaughter, Persephone Anderson. He is also survived by his sister, Lorene Kampf (Karl), of Blue Earth and numerous nieces and nephews.

He was preceded in death by his parents and sister, Susan McDonough.