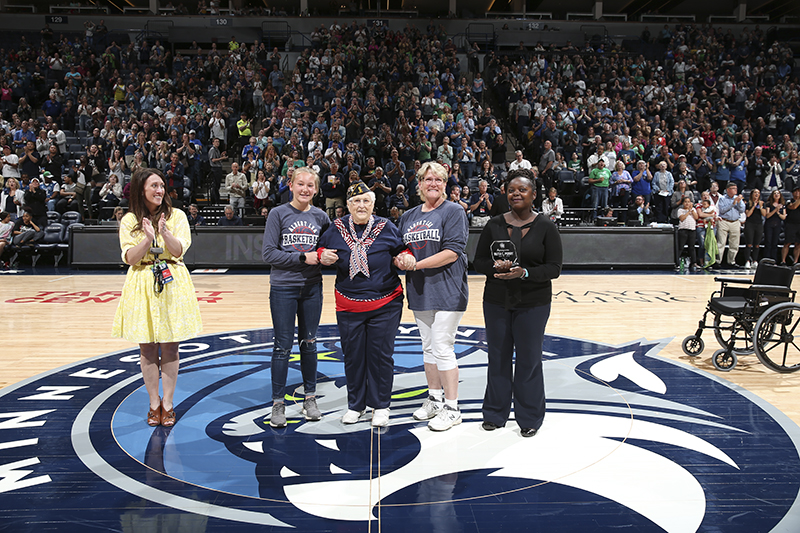 Throughout the 2019 season, the Minnesota Lynx, in partnership with Rasmussen College, will be honoring inspiring women who have made incredible contributions in many different areas while motivating, encouraging and lifting up others through personal and professional leadership.

At the annual Military Appreciation Night presented by DAV, the Lynx honored Ruth C. Perry, a veteran of over 20 years of service in the Air Force and decades of military-related volunteer work following her enlistment.

Perry came of age during World War II. Her father was in the army during that time and a cousin of hers was in the service as well—in the Navy, stationed at Pearl Harbor. On the day of the Pearl Harbor bombings, he was visiting a friend on the Arizona. He was killed when the ship was destroyed. Perry’s family connections and her cousin’s sacrifice were what inspired Perry to join the service.

In December 1944, when she was 20 years old, Perry enlisted in the Army Air Corps, which became the U.S. Air Force in 1948. World War II was coming to a close, but there was more conflict on the horizon. Perry served more than two decades in the military in various postings — through the Korean War and the beginning of the Vietnam War.

“I think it was the best thing that ever happened to me to take that basic training and learn right from wrong and what you should do and shouldn’t do,” said Perry. “Then I was put in charge of the base post office, which was an experience that most people don’t get at that age—to be in charge of some place.”

During her next enlistment, when her commanding officer learned that she knew how to type, Perry was given a job as a clerk, typing out special orders. Later, she was deployed to Germany, where she managed activities for Air Force athletic programs—it was a job she enjoyed very much.

“It was something to do—we did it more for practice than anything, just to get the movement,” said Perry. “We didn’t play any serious games; we didn’t have a team that went out. But the Army had seven or eight different units.”

Perry eventually moved into a job as a recruiter. Every woman looking to get into the service in Minnesota, North Dakota and half of Wisconsin had to meet with Perry.

Throughout her entire experience in the military, Perry began to recognize the need for volunteers across many of the military’s efforts. They never had enough hands. So when she left the service, Perry stayed involved. Among other things, she served as the chaplain at the American Legion in Albert Lea, volunteered at St. John’s nursing home and spent Monday nights helping serve meals at Loaves and Fishes.

While Perry’s contributions to this country and society are remarkable, she’s quick to deflect praise.

“I think it’s nice of them, but I think all the women in the service deserve it,” she said of the Lynx honoring her. “I try to (represent them) … I look up to them too.”

Recognition at a basketball game is a small reward for a lifetime of service, but it’s important to thank and honor people like Perry who have given their lives to others.